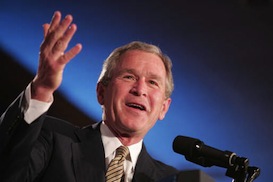 This piece draws on Bevin Alexander’s analysis of Confederate Civil War General Stonewall Jackson’s plan to march north against Washington, D.C. Rather than remain tied down before Union armies in Virginia, Jackson wanted to take the war to his enemy’s capital. Southern leaders, being unable to think more broadly than the immediate tactical situation, rejected the plan; the result was not a southern victory, but stalemate and slaughter. Poole suggests that America should follow Jackson’s strategy and extricate its troops from Iraq by marching through Syria to the sea, thus removing the Assad regime. The resulting civil war, he says, would change the situation in the Middle East fundamentally, and would serve American interests. Leaving aside Alexander’s analysis of the Civil War, what are the merits of Poole’s plan?

What’s good about Poole’s article is that it asks us to think outside the scope of how we are doing things right now. It calls for rejecting our present efforts at fighting an insurgency and for mounting a decisive offense. His plan also identifies the fact that Americans can win, want to win, and will vote for a leader who aims to win. The article is also right to observe that the Iraq Study Group report is a blueprint for retreat into defeat.

What’s bad about Poole’s actual plan is that it runs thoroughly counter to our proper purpose. There are no tactical reasons to march through Syria to the sea. Such reasons did exist for Civil War generals, given the logistics at the time, but they do not exist in today’s context. We should adopt such a plan only if it serves our legitimate policy goals, not on the grounds that it looks tactically impressive. This plan does not serve such goals. Our primary enemies are Islamic Totalitarians, not the secular thugs in Syria. To remove Assad’s secular regime—and not the regime in Iran—would leave an even larger power vacuum for Iran to move into. There would be civil war, and, in the end, it is nearly inevitable that the Shiite clerics would win that war. The result would be an Iranian caliphate stretching from the borders of India to the Mediterranean.

There is no escaping the strategic necessity of removing the Iranian regime prior to dealing with anyone else in the region. Syria depends on Iran, not vice versa. A proper respect for Stonewall Jackson would focus on his choice of objectives: Washington, his enemy’s capital. The capital we need to hit is Tehran, not Damascus. In the end, Poole’s piece does not take its own tactical suggestion seriously. Poole asks us to think about the broader context of the mess in Iraq, and to adopt a drive to victory rather than accept a stalemate; his particular plan, however, would take us in the wrong direction.

Thanks to reader N. Subramanian for pointing out Poole’s essay.