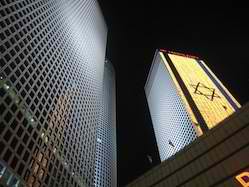 I am proud to note that my article, “No Substitute for Victory: The Defeat of Islamic Totalitarianism,” has been transmitted into Hebrew. It appears in Nativ: A Journal of Politics and the Arts, vol. 20, n. 3.116 (May – June 2007). Nativ is published by the Ariel Center for Policy Research. From its website: “The Ariel Center for Policy Research (ACPR) is devoted to incisive research and discussion of political and strategic issues concerning Israel and the Jewish people.”

No Substitute for Victory: The Defeat of Islamic Totalitarianism

In the face of rising threats to their freedom and rights, Americans today are uncertain about what a proper foreign policy should be. This uncertainty arises from the philosophical influences of pragmatism and altruism, which have misguided American leaders for 50 years, and have made it difficult for Americans to evaluate their leaders and to evaluate their actions. As a result, Americans have failed to forthrightly confront rising threats, and have not properly supported allies – in particular, Israel. We have, as a result, emboldened and empowered the worst threat to the West in centuries.

This article uses the historical example of American policy towards Shintoism in post-1945 Japan, in order to show that a proper policy today would first identify Islamic Totalitarianism as the political threat facing the West, and would then direct American resources towards ending the political imposition of Islamic Law, beginning with the Islamic State of Iran. By identifying the advocates of political Islam – those who would impose Islamic Law by force – as the true enemy, Americans could destroy its state manifestation wherever it appears, and then offer an intellectual alternative to jihad. This is the only way to end the threat posed by Islamic Totalitarianism, and to re-establish a proper basis for freedom across the globe.

John David Lewis was a contributing editor to TOS from the journal’s second issue, in 2006, until his death, on January 3, 2012. He was a visiting associate professor in the Philosophy, Politics, and Economics Program at Duke University. He held a PhD in classics from the University of Cambridge and taught at the University of London. He had also been a senior research scholar in history and classics at the Social Philosophy and Policy Center, Bowling Green State University, and a fellow of the Foundation for Objectivist Scholarship. He published in journals such as Journal of Business Ethics, Social Philosophy and Policy, Polis, Dike, and Bryn Mawr Classical Review, and lectured on classics, military history, and contemporary political issues at numerous universities and for private groups. His research interests were in ancient Greek and Roman thought, military history, and their connections to the modern day. His books are Solon the Thinker: Political Thought in Archaic Athens (Duckworth, 2006), Early Greek Lawgivers (Bristol Classical Press, August, 2007), and Nothing Less than Victory: Decisive Wars and the Lessons of History (Princeton,2010). Dr. Lewis also wrote for Capitalism Magazine. His website is www.JohnDavidLewis.com.
View all posts by John David Lewis →
The Rushdie Fatwa and ‘Religion vs. Free Speech’
‘Loophole’: Anti-Euphemism of Statists
Return to Top