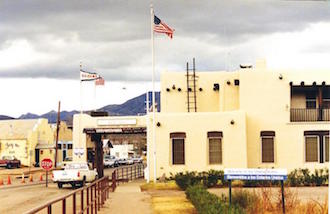 The question of how to reconcile the right to immigrate to America with an objective screening process has arisen in several forums lately, so I’d like to address it here. Because I answered this question in a reply to a letter to the editor in the Summer 2009 issue of TOS, I’ll simply post that exchange:

In “Immigration and Individual Rights” (Spring 2008), Craig Biddle says that immigrants should be required to pass “an objective screening process, the purpose of which is to keep out criminals, enemies of America, and people with certain kinds of contagious diseases.” But would it not be a violation of the rights of immigrants to force them to pass such a screening process? Obviously, criminals, terrorists, and people with infectious diseases should not be allowed to roam free, but would not a screening process presume immigrants guilty until proven innocent? What is the difference between forcing immigrants to pass screening measures and forcing citizens to do the same? Immigrants may represent potential threats insofar as criminals and disease-carriers may be among their ranks. But unapprehended criminals and disease-carriers exist among U.S. citizens, too. Why should immigrants but not citizens be forced to undergo a screening process?

We need to unpack several issues here. To begin, Mr. Labeit is conflating a conditional requirement with the initiation of force, but these are not always the same thing, and in this context their difference is pivotal. Requiring would-be immigrants to pass an objective screening process in order to enter the United States is not the same thing as forcing them to undergo a screening process. If they do not want to go through the process, they are free not to do so—and thus not to enter the country. Unless they are terrorists or criminals or seek to spread an infectious disease, however, there is no reason for them to object to such a policy. People come to America to enjoy the (relative) protection of rights within our borders; they cannot have that value and buck it too.

Nor does an objective screening policy violate the presumption of innocence principle. The purpose of the presumption of innocence principle in the American legal system is to ensure that suspected criminals within that system are not punished unless they are first proven guilty in a court of law. This principle does not apply to the question of whether would-be immigrants should be screened before entering America, for at least two reasons: (1) Would-be immigrants are not yet within the American legal system, and (2) such screening is not a punishment but an objectively warranted safety measure.

Like all political policies, those pertaining to immigration are properly formed and applied with respect to the relevant context. Part of the context surrounding immigration policy today is that tens of millions (if not hundreds of millions) of Islamists want to kill Americans (or see us killed). Our government has a moral and constitutional responsibility to stop these would-be killers from waltzing into America. (More essentially, our government has a responsibility to destroy the states that breed and sponsor these killers; but until it embraces that responsibility, we are faced with the problem of jihadists seeking to kill us, and we have to deal with it accordingly.)

Another part of the relevant context is that immigrants generally do not come here from the equivalent of Virginia; many of them come from third-world countries where deadly contagions are rampant and medicine is virtually nonexistent. Our government has a responsibility to take reasonable precautions to protect Americans from such objective threats. There are, of course, significant differences of kind and degree among diseases, and an objective immigration policy must take these differences into account. For instance, whereas we obviously should not permit someone with smallpox to enter the country and walk the streets of Manhattan, nor should we prohibit someone with herpes from doing so. As I wrote in endnote 2 of my article:

Carriers of deadly contagious diseases such as cholera, diphtheria, infectious tuberculosis, smallpox, yellow fever, and severe acute respiratory syndrome (SARS)—who would thus pose an objective threat to the lives and health of Americans—are legitimately forbidden entry to America (unless they are being safely transported to a private facility for medical treatment). Exactly where the line should be drawn regarding the immigration of people carrying less-dangerous contagious diseases is a technical matter to be determined by medical and legal experts.

The details of an objective screening process for immigrants are a complex matter that I have not worked out. But the purpose of the process is clear-cut: to protect Americans’ rights to life, liberty, and the pursuit of happiness. The right to life is the fundamental right, and when an alleged right—such as a foreigner’s “right” to enter America without being objectively screened—is in conflict with this fundamental right, then that alleged right cannot be a right. Morality is not a suicide pact.

Our government’s proper purpose is to protect the rights of citizens and other individuals within our borders. So long as the screening process for immigrants is limited to reasonable measures aimed at keeping out enemies, criminals, and people with certain kinds of contagious diseases, it is not only consistent with this purpose of government; it is mandated by it.

Why Harry Reid Loves Social Security
From the Editor, Fall 2010
Return to Top