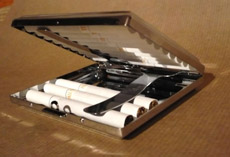 FoxNews.com reports that four of the five biggest U.S tobacco companies are suing the federal government to stop it from forcing them to use “new graphic cigarette labels that include the sewn-up corpse of a smoker and a picture of diseased lungs.”

They are right to do so: The government’s proposed regulation is an obscene attack on the tobacco industry.

U.S. tobacco companies make their profits through voluntary exchange; they do not force anyone to smoke. And everyone today is well aware of the risks of smoking—just as everyone is aware of the risks of driving, flying, eating Twinkies, and drinking beer. The government’s constant assault on tobacco companies is a violation of their rights and is contrary to the government’s proper function of protecting rights.

Kudos to R.J. Reynolds Tobacco Co. and Lorillard Tobacco Co. for leading this lawsuit; kudos also to Commonwealth Brands Inc., Liggett Group LLC, and Santa Fe Natural Tobacco Company Inc. for joining the fray in defense of their rights. More businessmen should follow their example and stand up to improper government force.

Ayn Rand’s Theory of Rights: The Moral Foundation of a Free Society
From the Editor, Fall 2011
Return to Top