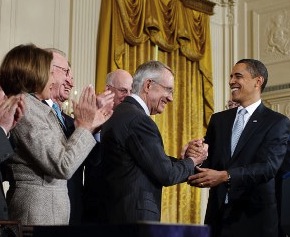 As part of the left’s ongoing assault on productive Americans, Sen. Harry Reid is leading the senate Democrats in an effort to impose a new 5.6 percent surtax on people making a million dollars or more. This is economically stupid and morally wrong.

Generally speaking, people who make a million dollars or more do so by means of businesses they own; they run their businesses by employing people to do the various jobs involved; and they employ people by means of the revenues generated by the businesses. To confiscate more money from these business owners is to further prevent them from expanding their businesses and creating more jobs—and thus to cause more unemployment. That is economically stupid.

What does this say about Sen. Reid and company?