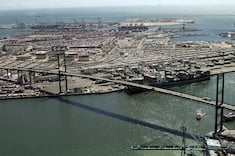 CBS LA reports that $489,000 of federal taxpayer stimulus money was used to renovate a yacht that gives people “free” tours of the Port of Los Angeles.

Although, in the age of “stimulus” packages and bailouts, this is not a lot of money, it does illustrate the utter disregard the current government has for individual rights.

The government’s job is to protect individual rights, not to take money from hardworking Americans to provide other Americans with free tours on a yacht. If politicians aimed to show perfect contempt for struggling taxpayers, this is the kind of thing you’d expect.

Tom Schatz with Citizens Against Government Waste (CAWG) calls for the government to sell the yacht. This is a great idea. LA is currently more than $70 million in the red; revenue from selling the yacht could be used to pay down some debt while lessening government assets and services that have nothing to do with protecting rights.

More Americans should be outraged at a government that spends their hard earned money on such foolishness.