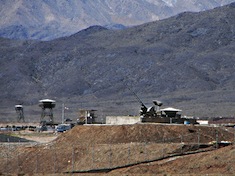 According to the Associated Press, the International Atomic Energy Agency (a branch of the United Nations) said in a confidential report that “Iran has rapidly ramped up production of higher-grade enriched uranium over the last four months.” The AP notes that this “feeds concerns about how quickly the Islamic republic could produce an atomic bomb.” The report also said “Iran had failed to give a convincing explanation about a quantity of missing uranium metal. Diplomats say the amount unaccounted for is large enough to be used for experiments in arming a nuclear missile.”

All honest observers have long known that the Iranian regime is pursuing nuclear weapons. That the IAEA is becoming suspicious only shows that the fact is too obvious even for the UN to continue evading much longer.

But the Iranian regime’s nuclear ambitions are just the tip of the iceberg. As I said in a recent blog post,

The Iranian regime has killed U.S. troops in Iraq and Afghanistan, has long sponsored terrorist groups such as Hamas and Hezbollah, has slaughtered its own citizenry, and continually calls for “Death to America” and “Death to Israel.”

That such a regime exists—even aside from its efforts to acquire nuclear weapons—should have moved the United States and its allies to obliterate the Iranian theocracy long ago. That the regime is actively seeking nuclear weapons clearly heightens the urgency.

It can’t be said enough: The American and Israeli governments have a moral obligation to destroy the Iranian regime.