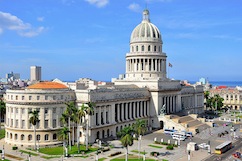 Two U.S. senators a few weeks ago went to Cuba to discuss the release of jailed American, Alan Gross, with Cuban dictator Raul Castro. Gross “is serving a 15-year jail term for spiriting satellite and other communications equipment onto the island while on a USAID-funded democracy-building program. Cuba considers the programs an attempt to destabilize the government, and Gross was convicted of crimes against the state, not espionage,” the Washington Times reports.

The United States should never have allowed Castro and his communist ilk to control a country so close to the United States in the first place. The Cuban Missile Crisis—in which the bloodiest dictatorship in history tried to arm Cuba with nuclear missiles—is a good indication why. Further, Cuba directly supported the communist regime of Grenada, giving it weaponry, building airstrips to support insurgents in Latin America, and deployed troops in the war against the United States during the Invasion of Grenada. Cuba has been supporting violent anti-American forces around the world and serves as an outpost in which anti-American forces can get close to U.S. shores.