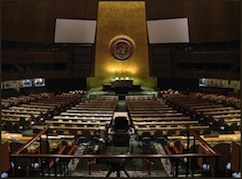 Fox News reports that Khulood Badawi, an officer in the UN Office for the Coordination of Humanitarian Affairs (OCHA), “used Twitter to send a picture of a bloodied child in her father’s arms with a caption: ‘Palestine is bleeding. Another child killed by Israel. Another father carrying a child into a grave in Gaza.’” The child in the picture, however, was a victim not of Israel but of an accident. As Israeli Ambassador to the UN Ron Prosor wrote in a letter to OCHA Under-Secretary General Valerie Amos, “The picture was taken and published in 2006 by Reuters, which reported that this child died in an accident. She was not killed by Israeli forces.”

Badawi, of course, remains employed by the UN.

As I said in a previous post on the United Nations,

The U.N. is a fundamentally corrupt institution that supports tyrannical regimes and terrorist groups across world—from giving a platform to Mahmoud Ahmadinejad and his efforts to annihilate Israel, to granting the Palestinian Liberation Organization membership in UNESCO, to appointing North Korea as the chair of the Conference on Disarmament. The U.N.’s actions are consistently pro-tyranny and anti-America.

No one should be surprised that the UN would harbor dishonest, pro-terrorist, anti-Israeli scum such as Badawi. But everyone should be disgusted by it.

Obama’s Attack on the Supreme Court is an Assault on the American System
Richard Salsman: Strike Down All Health-Care Mandates
Return to Top