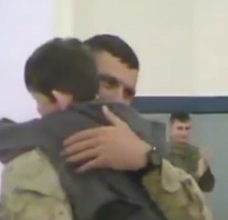 When Staff Sgt. Jeremy Cooney, a Marine deployed in Afghanistan, returned home, he was greeted with a great surprise. Doctors originally said that his son, Michael, who is afflicted with cerebral palsy, “would never walk or do much of anything,” explains Jeremy’s wife. “While daddy was away, he learned to walk. For his homecoming, we set it up for Michael to walk to his daddy for the first time ever! We kept the fact that he could walk a secret the whole time his dad was gone!”

Sgt. Cooney crouched down and watched in amazement as his son walked toward him when they saw each other in a gym at North Carolina’s Camp Lejeune. When the boy was within arm’s reach, Cooney scooped him up in his arms and the two shared a long hug.

Melissa Cooney and three other children held welcome-home posters and then joined in the hug. When Melissa Cooney walked to the camera after the hugging with her 6-year-old son in her arms, she asked him a question, but his eyes were focused on his father.

“He’s like, ‘I’m not taking my eyes off of daddy,’” Cooney said with a laugh.

A salute to Staff Sgt. Cooney for his commitment to defending America—and congratulations to Michael for his perseverance and success.

Here’s to a future full of joy for the Cooneys.

Check out the video here:

Joshua (John M.) Lipana was, until his death in 2013, an assistant editor of The Objective Standard Blog and a freelance writer based in the Philippines. His writings appeared in numerous print and online publications, including Free Enterprise,Capitalism Magazine, NewsReal Blog, and The American Thinker.
View all posts by Joshua Lipana →
Review: The Godless Constitution
The Wasteful Destructiveness of Tax-Funded Education
Return to Top