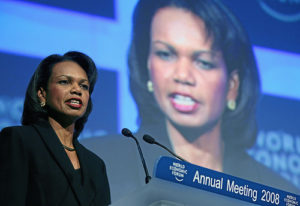 At the Republican convention, former secretary of state Condoleezza Rice, and others, directly challenged President Obama’s infamous “You didn’t build that” speech. Rice was particularly eloquent:

[T]he essence of America, what really unites us, is not nationality or ethnicity or religion. It is an idea. And what an idea it is. That you can come from humble circumstances and you can do great things, that it does not matter where you came from, it matters where you are going.

Although Republicans often betray the ideal of individualism that Rice forthrightly expresses here, it is nevertheless heartening to hear her and other Republicans condemn the left’s politics of envy and praise individual success.

Republicans, make this your MO.