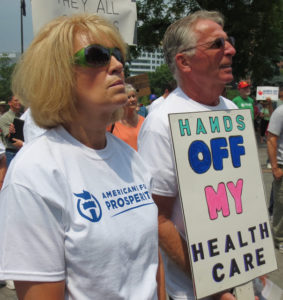 In his latest Forbes.com article, Dr. Paul Hsieh elucidates the need for liberty-loving Americans to speak out against ObamaCare, saying, “[do] not let the government escape responsibility for problems they’ve created”:

As the problems of ObamaCare inevitably emerge, the big question will be whether they will be blamed on the residual free-market elements of our health system or on the new government controls. This will be the battle of the “narrative.” . . .

If we let the government shift responsibility for ObamaCare’s problems onto the residual private sector, those problems will eventually be used to justify a government-run “single payer” system. On the other hand, if Americans hold the government appropriately responsible, we stand a chance at adopting genuine free-market health reforms.

The government is already planning its own health care propaganda campaign aimed at the American people. California state government officials in charge of implementing that state’s ObamaCare “exchange” want Hollywood to include pro-ObamaCare storylines in popular shows like “Grey’s Anatomy” and “Modern Family” to highlight the supposed benefits of the new law. . . .

The electoral battle of 2012 is over, but the battle of the narrative is just beginning.