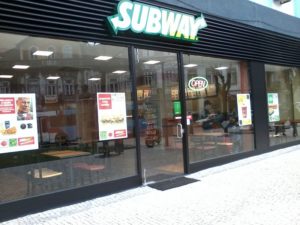 Fred Deluca, founder of Subway restaurants, recently noted that “If I started Subway today, Subway would not exist.” Recalling the early days of Subway, he said, “I had an easy time of it in the ’60s when I started,” but today “I just see a continuous increase in regulation.” CNBC reports:

Fred Deluca, the founder of privately-held Subway Restaurants, said government regulations are hurting small businesses and that this environment has prevented entrepreneurs from creating value in the market. . . .

Deluca said the environment for entrepreneurs in the U.S. has “continuously gotten worse because there are more and more regulations. It’s tough for people to get into business, especially a small business.”

Subway is now a worldwide company operating in ninety-eight countries—from the United Kingdom to Israel to Iceland to Singapore—providing dining, enjoyment, employment, and franchise opportunities for millions of people. How many would-be Subways—how many value-creating companies—are being nipped in the bud by business-thwarting regulations? How many would-be Fred Deluca’s are unable to start businesses or to succeed because of government interference?

Deluca and every aspiring entrepreneur should be completely free to start and run businesses as they see fit, so long as they do not engage in rights-violating force or fraud. Such freedom is a moral right; government has no moral right to violate it. And the moral is the practical: When and to the extent that rights are recognized and protected, Deluca and other entrepreneurs are able to produce goods and services that make our lives great.

Cheers to Fred Deluca for creating a monumentally successful business—and for speaking out against the growth of the regulatory state.

The Fruits of Capitalism Are All Around Us
Education Activist Michelle Rhee is Courageous, but No “Radical”
Return to Top