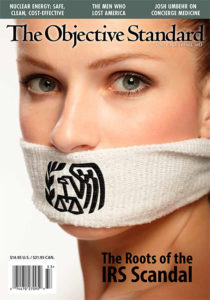 First, a quick announcement about a change in The Objective Standard’s publishing schedule: Beginning with the Fall 2013 issue, the quarterly will be published a month earlier than in the past. The new schedule is as follows.

Correspondingly, the Fall 2013 print edition of TOS will be mailed tomorrow, and the electronic versions—including online (HTML), ebook, audio, and Kindle—will be posted on August 20.

The contents of the Fall issue are:

The Roots of the IRS Scandal
Steve Simpson

Oz the Great and Powerful, directed by Sam Raimi
Reviewed by Ari Armstrong

The Men Who Lost America: British Leadership, the American Revolution, and the Fate of the Empire, by Andrew Jackson O’Shaughnessy
Reviewed by Alexander V. Marriott

The Real Crash: America’s Coming Bankruptcy—How to Save Yourself and Your Country, by Peter D. Schiff
Reviewed by Michael Dahlen

The Chronicles of Prydain, by Lloyd Alexander
Reviewed by Daniel Wahl

Government Has No Business in Broadband Business
Michael A. LaFerrara

There Is No Right to Religious Proselytizing in U.S. Military
Natalie Ogle

Get Government Out of Student Loans
Zachary Huffman

Obama Gets Rights Wrong; Americans Need to Get Them Right
Stephen Bourque

Letters to the Editor

If you’ve not yet subscribed to The Objective Standard, you can do so here. The journal makes a great gift for your active-minded friends and relatives. Subscriptions start at just $29 and are available in Print, Online, E-book, and Audio editions.
Subscribe Here | Give Gifts Here

Also, be sure to regularly visit TOS Blog—the source for daily commentary from an Objectivist perspective.

Enjoy the issue and have a wonderful fall!