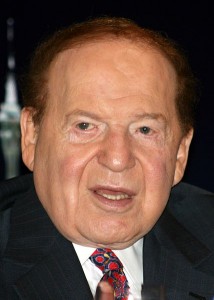 American businessman Sheldon Adelson (CEO of Las Vegas Sands Corporation, whom Bloomberg lists at the 14th richest person in the world), says the United States should drop a nuclear bomb in the Iranian desert—and then threaten to drop a second in the center of Tehran—in order to end Iran’s efforts to develop nuclear weapons, reports the Jerusalem Post.

Asked . . . whether the US should negotiate with Iran if it were to cease its uranium enrichment program, Adelson retorted, “What are we going to negotiate about?” Adelson then imagined what might happen if an American official were to call up an Iranian official, say “watch this,” and subsequently drop a nuclear bomb in the middle of the Iranian desert. “Then you say, ‘See! The next one is in the middle of Tehran. So, we mean business. You want to be wiped out? Go ahead and take a tough position and continue with your nuclear development. You want to be peaceful? Just reverse [your nuclear weapons program], and we will guarantee you that you can have a nuclear power plant for electricity purposes, energy purposes’,” Adelson said.

Although America’s goal regarding Iran should be not merely to end the regime’s quest for nuclear weapons, but to end the regime altogether, thus clearing the way for liberty minded Iranians to establish a peaceful, rights-respecting republic—and although the details of military strategy are matters for military experts to work out—Adelson is correct in calling for America to use pure and overwhelming force in dealing with the Iranian regime. As Adelson said, “It’s the only thing they understand.”

It is refreshing to hear a prominent American businessman openly acknowledge this fact, which so many Americans evade.

Kudos to Adelson for having the courage to say what is clearly true yet utterly contrary to conventional morality. Let’s hope more visible and outspoken Americans come to see the need for such force and demand that our government employ it before the Iranian regime succeeds in slaughtering more Americans.