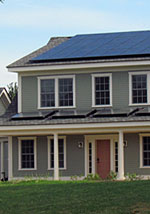 The National Institute of Standards and Technology (NIST) has built a beautiful and technologically innovative house—at taxpayers’ expense. No one actually lives at NIST’s house, dubbed the Net-Zero Energy Residential Test Facility; the government agency uses it as a laboratory to test energy-efficient technologies. Although the technology in the house appears to work well—as NIST boasted in a recent media release—government should not have built the house, and the house is not economical to operate. Consider a few reasons.

First and fundamentally, government has no legitimate business testing energy efficient technologies. Such testing is properly a marketplace activity and should be left to the marketplace, where individuals and businesses should be free to engage in or invest in or otherwise support such projects—or not to do so. To build this testing house, government confiscated people’s wealth, thereby violating their rights to use their resources according to their own judgment. If people wish to voluntarily contribute to some research project, they have a moral right to do so—but government has no moral right to force them to do so.

Next, although the house produces on average more energy than it consumes, and is in that sense a technological success, from a financial perspective the house is a disaster—which comes as no surprise given that it was funded by unwilling taxpayers. Consider some details. As NIST points out, the technology of the house, which includes solar panels, heavy insulation, triple-paned windows, a complex ventilation system, and the like, adds around $163,000 to the cost of the house. NIST claims an annual energy savings of around $4,400. From a simple ROI standpoint, the “investment” is hardly one to celebrate.

But the economics of the house are even worse than NIST’s media release lets on, because maintaining and repairing all that expensive technology would add more to the cost. In addition, as the project’s manager Hunter Fanney told me, NIST heats its home using an electric-powered heat pump. Wouldn’t it be far cheaper to heat the home with natural gas? Fanney said that, in areas where natural gas is readily available, that is indeed cheaper—but in his region natural gas is not readily available. Of course, that probably has something to do with the fact that Maryland, where the house is located, bans fracking. My old, gas-heated (and smaller) house leaks air like a sieve, yet during the coldest Colorado months my utility bill never exceeds $130 in a month (and this is despite the fact that Colorado mandates some use of expensive “renewable” energies). There’s simply no way NIST’s coercively funded and expensive technology can compete economically with freely funded and inexpensive natural gas produced by fracking.

In a video, Fanney says that the NIST house requires “no sacrifices in [people’s] living style”—but obviously he is not bearing in mind the full cost of the technology. If an energy-saving technology is worth the money, rationally self-interested people will happily embrace it, without the government’s “help.” It is precisely because NIST’s house sacrifices wealth—in this case for the sake of “the environment”—that government could build it only by forcing people to pay for it.