Politics & Rights
Image: Thomas Sowell spells out in an article worth reading the political meaning, historical significance, and actual nature of the so-called deal the Obama administration has struck with the murderous Iranian regime.
Craig Biddle April 7, 2015 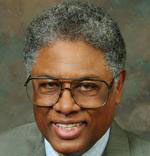 Thomas Sowell spells out the political meaning, historical significance, and actual nature of the so-called deal the Obama administration has struck with the murderous Iranian regime. Excerpt:

If you look back through history, you will be hard pressed to find a leader of any democratic nation so universally popular — hailed enthusiastically by opposition parties as well as his own — as British Prime Minister Neville Chamberlain when he returned from Munich in 1938, waving an agreement with Hitler’s signature on it, and proclaiming “Peace for our time.”

Who cared that he had thrown a small country to the Nazi wolves in order to get a worthless agreement with Hitler? It looked great at the time because it had apparently avoided war.

Now Barack Obama seems ready to repeat that political triumph by throwing another small country — Israel this time — to the wolves for the sake of another worthless agreement.

Back in 1938, Winston Churchill was one of the very few critics who tried to warn Chamberlain and the British public. Churchill said: “The idea that safety can be purchased by throwing a small state to the wolves is a fatal delusion.”

After the ruinous agreement was made with Hitler, he said: “You were given the choice between war and dishonor. You chose dishonor, and you will have war.”

Chamberlain’s “Peace for our time” lasted just under a year. . . .