. . . you had written to [President] Bush to present a solution to the problems in the world. What an excellent idea. But have you noticed that the problem in the world is you yourself? . . .

You wrote to George Bush: ‘[You intend to] establish a single global society which is to be ruled by Jesus and by the righteous of the earth . . .’

The letter is available at the Middle East Media Research Institute, an organization that deserves our moral and financial support. 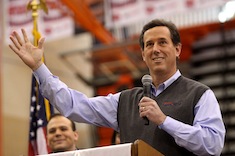 To this point in time, Nabavi is right: explicit calls for a theocracy inside America remain limited to a small group of religious conservatives. But while explicit calls for socialism remain among only a small group of leftists, our country has nevertheless adopted socialist policies impossible three generations ago. The encroachment of religiously-based laws can accomplish a similar theocratic result in less time, if not opposed in a principled way. Fines against the media for “indecency,” and “faith-based” initiatives, are cases in point; all such censorship and religious socialism set precedents for even greater attacks on our freedom in the future. The price of a secular society is eternal vigilance against such laws, and intransigent opposition to the ideas and people that make them possible.