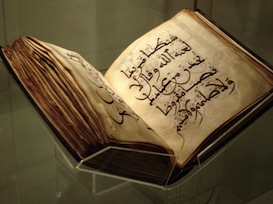 Many people in the West maintain that the Koran is opposed to terrorism: the initiation of violence against unarmed civilians to incite terror for a political cause. To many westerners, Bin Laden, et al are motivated by a totalitarian political ideology, not by Islam, and are “hijackers” of Islam, not genuine followers of the religion.

But the Koran, and many Middle-Eastern Muslims, say otherwise. Here, for instance, is what Egyptian MP Ragab Hilal Hamida, from the Muslim Brotherhood, said during a parliamentary session discussing the Inter-Arab Agreement on Combating Terrorism:

According to the shari’a, a Palestinian who is prepared to sacrifice his life deters the enemy, in the way [sanctioned by the Koran]: “Make ready against them your strength to the utmost of your power, including steeds of war, to strike terror into the hearts of the enemies of Allah and your enemies, and others besides, whom ye may not know, but whom Allah knows”….

[T]here are some ignorant Muslims who do not understand the tenets of their faith… It is [our] duty to repel any enemy of the Islamic and Arab countries, using “terrorism” rather than using violence….

I support all of bin Laden’s and Al-Zawahiri’s operations against occupation, but if they [ever] issue a fatwa [that condones operations] against civilians in some Arab or Muslim country, I will be the first to condemn them!

Got it? 9/11 was not an act of violence; it was an act of terror, used legitimately to deter aggressors (such as the stockbrokers in the Twin Towers) in order to prevent violence. “Violence” can occur only in an Islamic country, and only against Muslim citizens. To a mentality such as this, there is no violence against Americans and Israelis; there is only “resistance” and “terror”—fully sanctioned by the Koran.