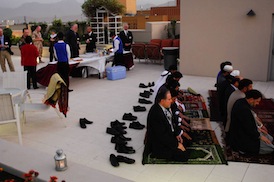 USA Today 9/18/06 reports that Muslim cab drivers at Minneapolis–St. Paul Airport are refusing to carry passengers with alcohol—even an unopened bottle of wine—due to their religious beliefs. Drivers are mad because refusing a fare causes them to be sent to the end of the line, and a wait of up to three hours before they get a new fare. So they are demanding special procedures, to allow them to select the passengers they want, without losing their place in line. It appears that some drivers are using this issue as a way to select passengers who want to go places that bring the highest fares. Airport officials have proposed special lights on their car roofs, to help passengers know which taxis serve alcohol-carrying passengers.

It is fascinating that so many Muslims now want to identify themselves visually as different from others. They want lights, and scarves, so that others will know who they are. Contrast attempts, by Germans and others in the past, to force Jews to wear identifying marks—Muslims now want these marks for themselves.

Once Muslims seize the moral high ground in such a way, claiming to be ideologically special, and willing to identify themselves as such, then it will be a small step to enforce this in law. Perhaps special courts should be required for all such drivers, to interpret legal matters according to their own special laws. The machinery will then be in place to advocate a high legal and political status for themselves, and an inferior status of others. This will force others into dhimmitude—that reduced status Muslims impose on others when Muslim law wins. Dhimmitude is a protection racket: it is a compact with the lower peoples to protect them, as long as they follow Muslim law. Protect them from whom? Those who enforce Muslim law.

This reminds me of the Mafia enforcer who tells a shopkeeper that $100 a week will buy him “protection” from the mob. “But who do I need protection from?” asks the shopkeeper. “Us” replies the enforcer.

Daniel Pipes has properly identified the attempts by Muslims to subvert minor cultural norms as very dangerous. If a cab driver does not want to carry me because I carry alcohol, then drive on and let me get into another cab. If it’s back of the line for him, so be it. If he will not give me a ride in his cab because my personal preferences conflict with the commands he has received from some mystic, then let him take the consequences.