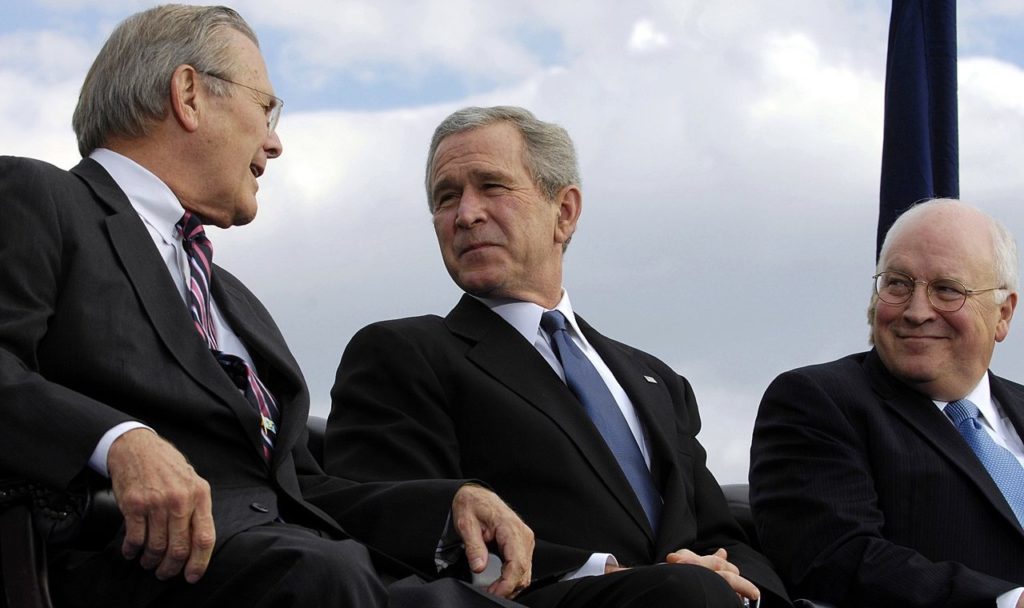 A New York Times article recently described the military skills our soldiers will need to engage in the operations our politicians are asking them to perform (“Military Hones a New Strategy on Insurgency,” October 5, 2006). The new doctrine renounces overwhelming force, focuses on reacting to insurgent attacks rather than winning offensive battles, and has a goal of protecting foreign civilians rather than defeating a hostile enemy.

Before the 2004 election, Vice-President Cheney lambasted John Kerry for wanting to fight a more “sensitive” war. But Cheney should rather have agreed, as that is exactly what we are doing. (I identified this before the election, in “President Bush’s ‘Sensitive’ War,” Capitalism Magazine, August 27, 2004.)

The Times article is right that the face of the military is changing: At military conferences, and in discussions with military officers and instructors, I repeatedly hear how we must change attitudes among a foreign population rather than use our force, and how it is preferable to let “bad guys” escape rather than to hurt civilians. The military is developing new tactics to achieve such ends.

In a visit to the military simulators at Fort Riley, Kansas, for instance, I saw a stunning array of technology. One enters a warehouse-style building, full of metal cubes with doors. Close the door, and you are in a tank: a mock-up of an M1 Abrams tank commander’s display, with monitors and controls to replicate real-world conditions. Six tanks can be networked, and sent on a mission. Instructors can ambush them, engage them with fire, and monitor their actions. Afterwards, in a classroom, participants can see an overhead view of the entire operation, and evaluate every move from above. Such technology is space-age and potentially beneficial—but what of the goals to which it is being employed?

It was once the case—in a by-gone era—that our goal in war was to defeat an enemy, thereby securing our safety. This meant demonstrating to enemy leaders, fighters, and civilians that victory for them was impossible—by destroying their capacity to fight. With such a goal in mind, the regime in Iran, for instance, which is providing the Iraqi insurgency with a steady stream of personnel and of material and psychological support, would not be allowed to remain in power. Local Iraqi warlords would face overwhelming assault. Civilians would learn not to harbor our enemies and not to support a hopeless cause.

But the new doctrine has nothing to do with defeating a deadly enemy or protecting American lives. The new “wisdom” is that “the more force is used, the less effective it is.” The army, it is said, must “clear, hold and build,” since building things for a foreign population is more important than demanding their surrender. The enemy’s safe-havens over the borders, its defiant leadership, and its sympathetic civilians, are not to be attacked. “Tactical success guarantees nothing”; the new aim is “to protect the Iraqis against intimidation.” (One wonders how the police in New York could protect a grocer from the intimidation of organized gangsters without destroying the Mafia that funds them—but this, in essence, is how our military now operates.)

There is one big idea behind such thinking, one idea that establishes the political and intellectual context for the new doctrine: altruism. It is altruism (“otherism”) that elevates the value of others over self. This is the core moral principle behind today’s Just War Theory—which is the direct application of altruism to the question of military ethics and doctrine.

Offensive war is based on the idea that one’s own citizens, and one’s own cause, are more valuable than the enemy and his cause. Every soldier who shoots an enemy, and every president who issues an ultimatum to a hostile power, is presuming this principle. But this, according to altruism, is self-interested, and thereby morally tainted. The new aim of the war—taken as an unquestioned absolute—is to bring good things to the population of a hostile nation, while hoping, as a secondary goal, that it will respond by embracing democracy and thus ceasing to threaten us (as if unlimited majority rule in the Middle East were the key to our security).

Since altruism provides no specific goals for war—it says only that, whatever our goals, they must be good for others and not self-interested—a lack of purpose is the inevitable result of the new military doctrine. The decline of civilian support in America for the Iraq war is a consequence of the inability to understand why one American should die for the Iraqis. And the contempt for America in the Middle East is the result of our unwillingness to assert ourselves or to destroy those spreading anti-American propaganda in the region. What American altruists see as virtuous deference to the needs of others, our enemies overseas take as weakness of will and submission.

Some commentators have praised this new military doctrine, while whitewashing its implications. Counter-insurgency war is not about victory or defeat, runs one argument; democracy for others is our purpose and will be the “final stage” of the war. We should fight on until the enemy establishes an electoral “Vote for Liberty!” campaign, blanking out the fact that “liberty” has a specific meaning, that people who do not understand it cannot be expected to defend it, and that any moral standard which requires us to sacrifice our liberty for theirs is a repudiation of liberty at its root.

The real problem, say others, is “leftists” who want to “cut and run”—evading the fact that the New Left political and economic agenda has been adopted lock, stock, and barrel by the New Conservatives. “Peace without Victors” was the call of liberal Woodrow Wilson in 1918 and is the call of conservatives today. Just War Theory itself is a leftist construct that has been embraced by conservative leaders, in many cases for its Christian overtones. Mr. Cheney may chide Mr. Kerry—but the Bush administration has taken the democrat’s advice.

Military experts are warning that we do not have enough resources to continue “fighting” this way. Since the military’s job is now to “counter” an endless “insurgency,” we would need as many army squads as there are buildings and street corners in the Middle East. Proponents claim that such a war may take fifteen years for Iraq alone—without considering the support flowing in from surrounding areas or the increasing threats to America from other parts of the world. The doctrine is a prescription for a stream of American body-bags, with no end in sight because no victory is being pursued.

America’s increasing technological superiority, combined with the deepening fog surrounding the moral purpose of such superiority, is a symptom of the gulf between science and the humanities that has characterized the past two hundred years. We combine soaring advancements in the capacity to control physical nature, with stagnation and regression in our understanding of man’s moral nature. If we do not grasp the moral goodness of self-interested action—which in war means the pursuit of victory over our enemies—our military will continue to increase in technological efficacy only to continue sacrificing it to the bathroom needs of foreigners.

None of this will deter the advocates of this new doctrine, for they are driven by a moral ideal—altruism—that carries far more weight in their minds than the need to defend our own freedom.