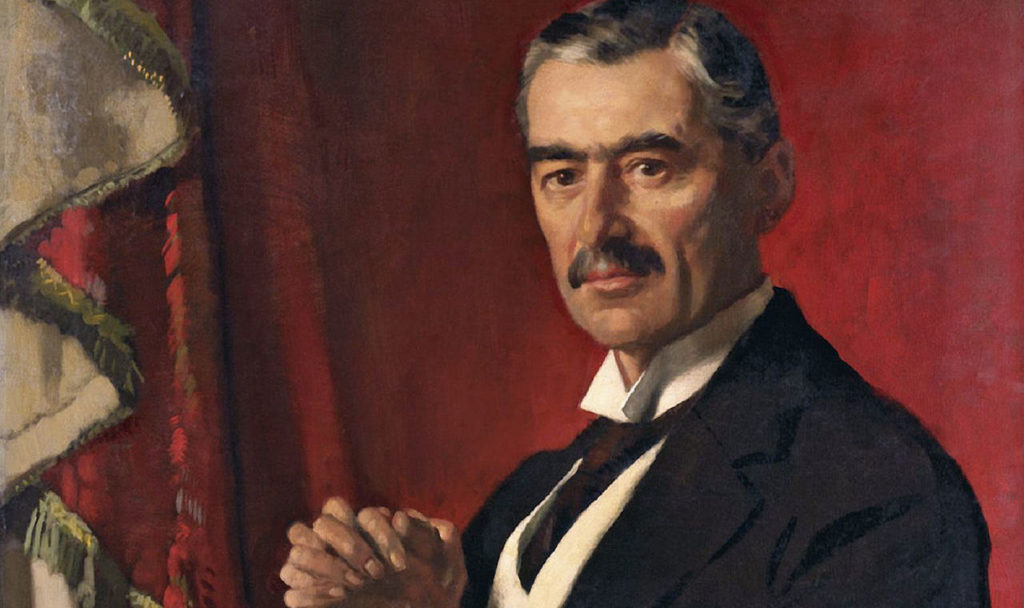 Author’s note: This is the second of three articles for The Objective Standard dealing with military history and its (in this case implicit) lessons for the modern day. The third article will consider the lessons of the American victory over Japan in World War II. These articles draw from my forthcoming book, Nothing Less than Victory: Military Offense and the Lessons of History from the Greco-Persian Wars to World War II (Princeton University Press).

Imagine that an asteroid is heading toward the earth at thousands of miles per hour. While it is still far away, a small force can change its direction a few degrees and avert a catastrophic collision. But as it moves closer to the earth, the force needed to divert it multiplies exponentially, until only a massive explosion can prevent disaster. It would be one thing if men did not know of the asteroid, or saw it coming and were impotent to act. But suppose they had the bombs and the rockets needed to deflect it—but refused to do so because of “international opinion,” a desire to spend the money on “social programs,” or a claim that we must not interfere in the comet’s own “natural” movements? This describes, in essence, Europe’s drift into World War II.

During the 1930s, men stood at a cusp in time, a point of momentous decision, watching the growing power of Germany under its screaming, malevolent leader. Their failure to confront Germany—and the devastating consequences of that failure—demonstrate the power of ideas, both to motivate aggressors and to undercut defenders from taking the actions needed to protect freedom.

On September 1, 1939, twenty years and nine months after the armistice of November 11, 1918, that had ended World War I, millions of Germans obeyed their Leader’s call for a war of national aggrandizement and launched a new slaughter across Europe. The attack on Poland was the climax of five years of military buildup by Germany, which had followed fifteen years of feverish international diplomacy, economic transfers, and political agreements. Most European leaders had worked fervently to avoid a new carnage. They fell prostrate before Hitler’s “Lightning War.” The deepest reasons why so many Germans joined the armies of the Nazis, hailed their leader, followed their orders, and drank to their war cannot be found in reasons as shallow as economic stagnation, political dissatisfaction, or bad feelings about the last war. These factors were present in many nations that did not attack. In essence, the Germans were in the grip of a philosophic pathology, a set of ideas that told them it was morally good to sacrifice themselves and others to the all-powerful State, the Race, and the Leader. The power of these ideas in German culture was expressed in the mass support that the Nazis enjoyed among “Hitler’s Willing Executioners.”1

But another force, outside of Germany, also pushed the world toward blitzkrieg and Auschwitz. This force too was a set of ideas—ideas in the minds of Germany’s opponents—which prevented England and France from confronting Hitler when they could. In the mid-1930s, British politicians in particular were restrained from action, not by an incapacity to act, but by a lack of will. Certain moral ideals—which rose to the cultural forefront after the horrendous experience of World War I—conditioned British politicians and their constituents to become virtual allies of Germany in its drive to regain its status as a powerful nation. The result was a paralysis in the western European nations, which disarmed them as surely as any bomb and allowed Hitler to build up his forces to the point where his ability to fight exceeded that of his enemies.

The appeasement of Germany by Britain in the late 1930s has become a synonym for weakness, focused on a single man: Prime Minister Neville Chamberlain, who claimed “peace in our time” by handing over Czechoslovakia to Hitler in September 1938. But Chamberlain’s appeasement, far from being a new, short-term plan by a weak man to deal with an emergency, was the culmination of a long policy that stretched back to World War I. The British desire for peace was conditioned by a set of moral ideas that hamstrung British leaders from recognizing the fundamental differences between their own nation and the German state, and the fundamental contradiction between the goals and policies promoted by leaders of the two nations. Those moral ideas gained cultural power in the aftermath of World War I. They sapped the will of the British people to oppose Germany when it was possible to do so, and left their leaders unable to take the steps needed to stop Germany from rearming. To understand how and why European leaders empowered Germany to rekindle the fires of war, we must unpack those moral ideas. . . .

John David Lewis was a contributing editor to TOS from the journal’s second issue, in 2006, until his death, on January 3, 2012. He was a visiting associate professor in the Philosophy, Politics, and Economics Program at Duke University. He held a PhD in classics from the University of Cambridge and taught at the University of London. He had also been a senior research scholar in history and classics at the Social Philosophy and Policy Center, Bowling Green State University, and a fellow of the Foundation for Objectivist Scholarship. He published in journals such as Journal of Business Ethics, Social Philosophy and Policy, Polis, Dike, and Bryn Mawr Classical Review, and lectured on classics, military history, and contemporary political issues at numerous universities and for private groups. His research interests were in ancient Greek and Roman thought, military history, and their connections to the modern day. His books are Solon the Thinker: Political Thought in Archaic Athens (Duckworth, 2006), Early Greek Lawgivers (Bristol Classical Press, August, 2007), and Nothing Less than Victory: Decisive Wars and the Lessons of History (Princeton,2010). Dr. Lewis also wrote for Capitalism Magazine. His website is www.JohnDavidLewis.com.
View all posts by John David Lewis →
Neoconservative Foreign Policy: An Autopsy
The False Promise of Classical Education