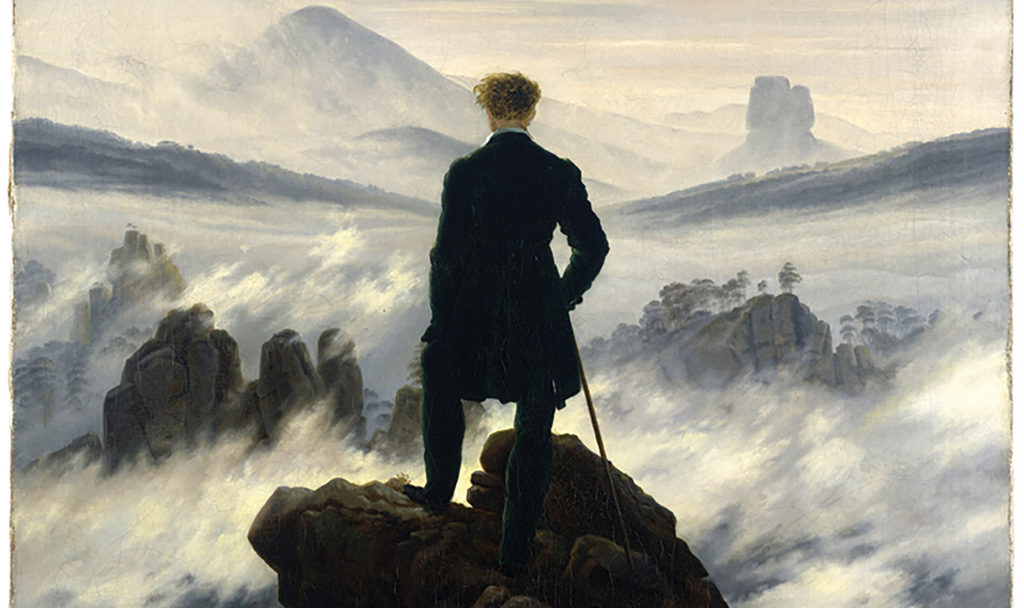 The romantic school of art, wrote Ayn Rand, “is concerned—in the words of Aristotle—not with things as they are, but with things as they might be and ought to be.”1 In her esthetic writings, Ayn Rand elaborated on this idea relative to her own field, the novel. But she said little about how it applies to the visual arts; and, when asked, she commented, “I wouldn’t claim that the classifications I’ve defined for literature hold for the other realms of art. Someone would have to establish that.”2

In taking up this challenge, I can think of no better artist to analyze than the German painter Caspar David Friedrich (1774–1840).

Although estheticians do not agree about what, fundamentally, makes a romantic artist, everybody agrees that Friedrich is one. The state of affairs is captured by art historian Joseph Koerner’s question: “What does it mean to say that Caspar David Friedrich is a quintessentially Romantic painter?”—and by his rather inadequate answer: “As evocation of the faraway and indistinct, as the evocation of an evocation, Romantic names that which is properly unnameable about the project of Romanticism.”3

Ayn Rand provided a more helpful approach. Romantic art, she wrote, “deals, not with the random trivia of the day, but with the timeless, fundamental, universal problems and values of human existence.”4 And at its highest development, the concern of romantic literature “is not merely with values, but specifically with moral values and with the power of moral values in shaping human character.”5

Friedrich held similar views in regard to painting. “To many it is incomprehensible that art has to emerge from a person’s inner being,” he wrote, “that it has to do with one’s morality, one’s religion.” But so it does. “You should trade only in what you recognize to be true and beautiful, noble and good in your soul.”6

And indeed, Friedrich’s paintings typically deal (from his own perspective) with man’s noblest, most exalted moral values and abstractions.

Tore Boeckmann’s mystery short stories have been published and anthologized in several languages. He is the editor of Ayn Rand’s The Art of Fiction and has lectured on literary esthetics and current affairs in Europe and America. His recent publications include “The Fountainhead as a Romantic Novel” and “What Might Be and Ought to Be: Aristotle’s Poetics and The Fountainhead” in Essays on Ayn Rand’s The Fountainhead, as well as “Anthem as a Psychological Fantasy” in Essays on Ayn Rand’s Anthem (both collections edited by Robert Mayhew).
View all posts by Tore Boeckmann →
Brook Takes Force to Mat, Wins
From the Editor, Spring 2008

1 Ayn Rand, “Introduction to the Twenty-fifth Anniversary Edition,” in The Fountainhead (New York: Signet, 1993), p. v. See also my “What Might Be and Ought to Be: Aristotle’s Poetics and The Fountainhead,” in Essays on Ayn Rand’s The Fountainhead, edited by Robert Mayhew (Lanham, MD: Lexington Books, 2007), pp. 155–75.