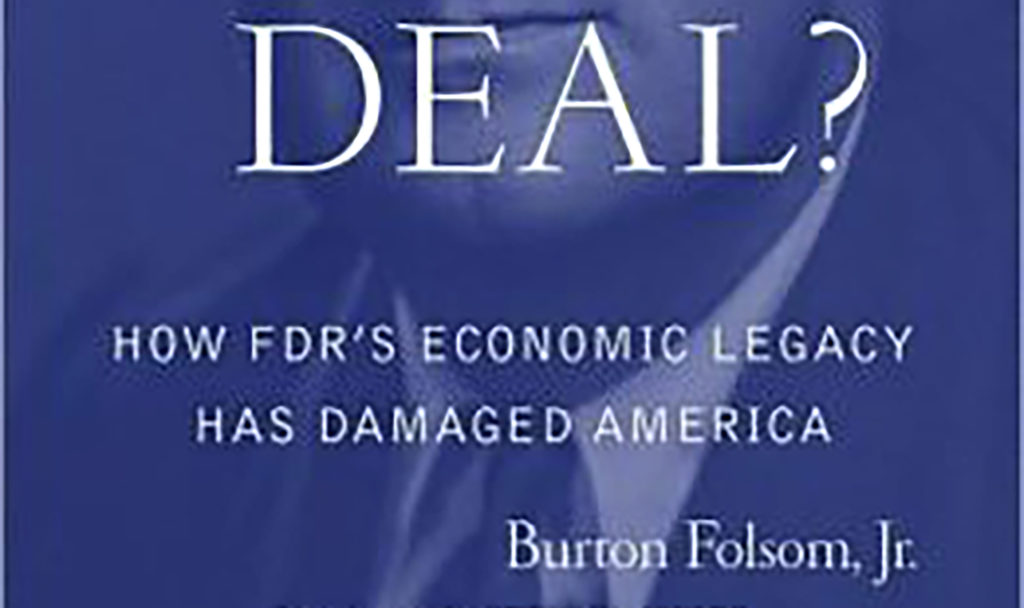 Seventy-five years have elapsed since Franklin Delano Roosevelt introduced the flurry of government programs he called the New Deal. In the years since, most historians have lavished FDR with praise, claiming that his bold leadership helped to pull America out of the Great Depression. Even those who acknowledge the failure of particular Roosevelt-era programs claim that FDR instilled hope and confidence in the American people, and that his economic failures were the result of his not going far enough in his policies and not spending enough money.

Today, amidst calls for increasing government regulation of the financial industry and increasing government spending through stimulus packages, the New Deal is making a comeback. In light of the recent mortgage crisis and economic downturn, pundits are calling for a revival of 1930s-style policies. Daniel Gross claimed at Slate.com that New Deal reforms were “saving capitalism again.” Newly minted Nobel economist Paul Krugman issued calls in the New York Times for President-elect Obama to mimic and expand FDR’s response to the Great Depression. And a recent Time cover called for a “New New Deal”—and featured an iconic photo of FDR, with Obama’s face and hands substituted.

As the Obama administration begins to implement its economic plan, Americans would do well to reexamine the history of the original New Deal and its effects. Though most historians rank FDR as a great president, some, including Burton Folsom Jr., boldly dare to ask if “the New Deal, rather than helping to cure the Great Depression, actually help[ed to] prolong it” (p. 7). According to Folsom, a professor of history at Hillsdale College, the answer is clearly the latter. In New Deal or Raw Deal? How FDR’s Economic Legacy Has Damaged America, he challenges the myth that FDR’s New Deal represents a shining moment in American history. As long as the mythology surrounding the New Deal remains intact, he notes, “the principles of public policy derived from the New Deal will continue to dominate American politics” (p. 15), costing Americans billions of dollars and further damaging the economy.

Following two brief chapters in which he explores contemporary historians’ evaluations of the New Deal and recounts Roosevelt’s early political career, Folsom shifts to the heart of New Deal or Raw Deal?: a seven-chapter investigation of New Deal agencies and regulations and their economic consequences. Here he explains how the National Recovery Administration, nominally created to stabilize prices and wages, actually led to “huge price hikes, price fixing, regulation of output, and persecution of efficient businessmen” (p. 56), resulting in real wages that were lower in 1935 than they had been in 1933 when the law came to be.

Folsom also relates the tragic consequences of the Agricultural Adjustment Act of 1933, which paid farmers not to produce on parts of their land, and which at one point required farmers to destroy existing food products that could have been sold to starving Americans. Folsom reports that by 1935, as a result of the AAA, “the United States had, for almost the first time in its national history, become a major food-importing nation” (p. 67).

Because “Roosevelt found the country’s gold standard to be hindering his political goal of promoting inflation” (p. 104), he authorized the government confiscation of privately-held gold—and began dictating its price, sometimes according to his “lucky numbers,” during his breakfast in bed (p. 105). FDR’s attack on gold caused a 40 percent devaluation of the dollar and destroyed the gold clauses in many private contracts.

Throughout these chapters, Folsom conclusively demonstrates that the aforementioned New Deal programs and regulations, and others such as the minimum wage law, Social Security, income and excise tax hikes, and pro-labor laws not only impeded economic recovery but actually caused the economy to slip into a recession within a depression.

Although some historians and economists recognize that the New Deal’s economic policies were failures, they nevertheless point to FDR’s character and leadership as evidence of his greatness. Folsom shatters this myth as well. In four chapters he documents, among other dishonest tactics, how FDR used the IRS to persecute his political opponents, how he manipulated federal appropriations in order to bolster his electoral position, and how he consistently lied to and deceived the American people, including his own close advisors. In the run-up to the 1936 election, for example, more than 300,000 men were added to the Works Progress Administration (WPA) payroll, especially in swing states, only to be removed shortly after the election was over. After convincing Congress in 1934 to establish the Federal Communications Commission, FDR used the newly created regulatory body to curtail anti-administration criticism on the radio. Folsom notes that “right away, the FCC reduced the renewal period of broadcasting licenses from three years to six months” (p. 234), thereby enabling regulators to silence FDR’s critics more quickly. Folsom also reveals that, after FDR’s court-packing plan was rebuked by Congress in 1937, his “anger and vindictiveness overrode his political judgment, and he mounted a campaign to snub or purge most of the senators and some House members who opposed [it]” (p. 206).

One of Folsom’s most important observations is made in an insightful chapter in which he explains why so many historians have missed the mark in their evaluations of FDR and the New Deal. He lays the blame firmly on the acceptance by these historians of the Progressives’ view of the American Constitution as a flexible and results-oriented document that must change as circumstances change. In their view, “government was not to be used to limit executive or legislative activity,” Folsom notes, “but to improve the lives of the people” (p. 256). Despite the clear record of lasting economic stagnation caused by the New Deal, historians “ignore many facts readily available” (p. 254) and instead focus on FDR’s good intentions and his call to guarantee everyone a “right to a comfortable living.” Thus, the author observes, because most historians have accepted the same activist view of government as did Roosevelt himself, they become complicit in his crimes, chronicling the New Deal years while omitting facts and evading the Deal’s destructive consequences.

Despite its many insights, the book contains a few flaws and suffers one serious shortcoming. In an otherwise penetrating chapter on FDR’s meddling with financial markets, Folsom oddly finds room to praise Roosevelt, albeit tepidly, for the Glass-Steagall Act (1933), which established the Federal Deposit Insurance Corporation and forcibly separated commercial and investment banking; and for the Securities and Exchange Act (1934), which created the Securities and Exchange Commission and gave it the power to dictate the actions of securities firms. Later, he lauds “some of the public works completed under the New Deal” for showing “some value for the tax dollars spent” (p. 110) and FDR for his “contagious smile, his hearty laugh, and his smooth tenor voice,” traits that supposedly “helped reassure many Americans that their country would somehow return to prosperous days” (p. 111). In a work otherwise dedicated to illustrating the folly of government programs, these bits of praise for one of their most infamous advocates stand out as gratuitous.

The more serious matter is Folsom’s failure to identify and emphasize the most important point with respect to the New Deal, namely, that it violated the rights of Americans on an unprecedented scale. Folsom characterizes FDR as a departure from the American Founders, but for the wrong reasons. Folsom claims that the Constitution “emphasized process, not results” and that following the process the Constitution laid out will “guarantee chances for almost everyone” (p. 255). Although Folsom briefly indicates that Roosevelt’s promise of an “Economic Bill of Rights” would, contrary to the Founders, impose “obligations on society to provide jobs, buy homes, and pay for educations” (p. 258), the point is made late in the book and almost in passing. Had Folsom made the point that the New Deal’s violation of individual rights was profoundly immoral, he could have more effectively countered the modern historians’ support for the New Deal on the basis of FDR’s “good” intentions.

Despite these flaws, Folsom’s book ranks among the most penetrating and objective accounts of the New Deal and the presidency of Franklin Delano Roosevelt. He systematically explodes the main historical claims about each of the vital aspects and programs of the New Deal and of FDR’s character and leadership. The book deserves a wide audience, especially when so many intellectuals and politicians appear so eager to implement a vigorous return to New Deal principles and policies.

Eric Daniels earned his PhD in history from the University of Wisconsin in 2001. He is a teacher and curriculum developer at LePort Schools in Orange County, California. Prior to joining LePort, he taught at Clemson University’s Institute for the Study of Capitalism. He has lectured to college groups, business associations, and international audiences on American intellectual, legal, business, and political history. He has written book chapters on individualism, antitrust, and American economic history; appeared on C-SPAN and Voice of America radio; and presented a TEDx talk in 2010. He has also contributed to the Oxford Companion to United States History.
View all posts by Eric Daniels →
Errors in Inductive Reasoning
Review: Better Day Coming, by Adam Fairclough
Return to Top