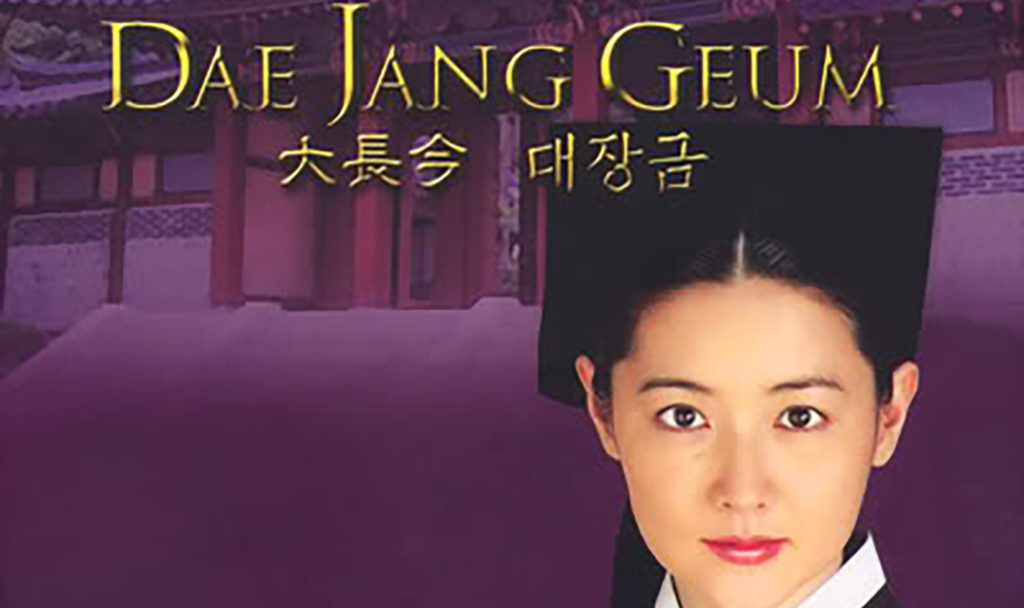 Dae Jang Geum is a 54-hour television series about an orphaned girl in 15th-century Korea who rises from her servant-class beginnings to become the first woman physician to the king. Her journey is laced with heroes and villains, achievements and setbacks, twists and turns from beginning to end. And the story is driven from start to finish by the various characters’ choices and values—primarily by those of the passionate, persistent, and principled Jang Geum (acted by Lee Yeong-ae and Jo Jung-eun).

From the moment she appears onscreen as a seven-year-old, Jang Geum (who is loosely based on an actual historic figure) acts on her own judgment for her own purposes irrespective of what others say or do. When her values are at stake, she routinely disregards social conventions and even disobeys her parents, whom she loves. For instance, as a member of the lowly servant class she is prohibited by custom, and consequently by her mother, from learning to read or write. As a girl, she is also prohibited from learning to hunt, an activity deemed appropriate only for boys. Nonetheless, Jang Geum sneaks off to the local school to learn the written characters and goes hunting for rabbits with the boys. When reprimanded by her mother for breaking these rules, Jang Geum demands to know the reasons behind them: “Why can’t I learn to read and write and hunt when I love it and am so much better at it than the [higher-class] boys?” Such early scenes set the stage for Jang Geum’s character and choices throughout the series. 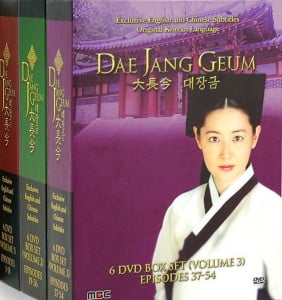 After losing her parents, Jang Geum sets her sights on the long-range goal of entering the Royal Palace and becoming the highest kitchen lady. She pursues this goal in part out of personal passion, and, in part, to record in an official logbook an injustice committed against her mother, who had once been a kitchen lady. After gaining admittance to the training program for kitchen ladies—a feat in itself for a servant-class girl—Jang Geum works tenaciously to learn everything she can and to perfect her skills. But in the Palace, obstacles abound—especially for a girl whose intelligence, skill, character, and achievements bring out the worst in the envy-ridden, power-lusting family of the Chois.

The central conflict in this drama is between Jang Geum and the Choi family, who have corruptly controlled the royal kitchen for five generations, using this position as a means to gain power and wealth. They correctly see Jang Geum as a threat to their operation and work to remove her from the Palace by any means necessary. As the two sides pursue their respective goals, nearly every episode ends with a cliffhanger that makes it almost impossible to resist starting the next episode immediately. Will Jang Geum be able to pass her kitchen lady exam despite sabotage by the Choi family? Will Jang Geum be imprisoned and sentenced to death for high treason? Will the evil plotting of Lady Choi (Gyeon Mi-ri) finally be exposed for the world to see?

Unlike the Chois, Jang Geum and her mentor, Lady Han (Yang Mi-kyeong), see their role in the royal kitchen as a supreme responsibility to prepare delicious, beautiful, and healthy food. In one episode, a high-ranking Chinese ambassador and his envoy visit the palace for several days, and the kitchen is charged with preparing for them only the tastiest dishes in accordance with their importance. When the envoy arrives, however, Jang Geum and Lady Han discover that the ambassador is diabetic. They proceed to prepare dishes of mostly vegetables, which they know will improve the ambassador’s health but which are seen by him as an outrageous insult. When Lady Han is imprisoned and awaiting punishment for this impudence, Jang Geum even more impudently speaks directly to the ambassador to explain Lady Han’s actions. He is so impressed with Jang Geum’s passionate and well-reasoned argument that he agrees to try eating her healthy dishes for five days—on the condition that, if he does not notice an improvement in his health, she will submit to any punishment he decrees, including, possibly, death. Jang Geum accepts the challenge and ultimately succeeds, freeing Lady Han and earning praise and gratitude from the royal family—but further enraging her enemies, who feel increasingly threatened by her integrity and accomplishments.

In another episode, Jang Geum’s hopes of achieving her goals seem permanently ruined when she is framed for high treason, demoted to a slave, and exiled to a remote island. But even in the face of such devastating setbacks, she refuses to give up. Upon learning that the only way a slave may enter life in the palace—where Jang Geum still has goals to achieve—is as a physician lady, she begins studying and training in the field of medicine. We see her passion for knowledge directed at a new target, seemingly unsolvable medical puzzles; we marvel at her ability to discover new and ingenious ways to diagnose and treat illnesses; we again see her firsthand approach to solving problems, always looking at the facts of a situation, integrating new data with her existing knowledge, and disregarding any customs or taboos that stand in her way.

Like Jang Geum, all the major and minor characters in the series are beautifully conceived and portrayed, and there are scores of characters. Other major characters of note include Lady Jung (Yeo Woon-gye), Keum Young (Hong Ri-na and Lee Se-yeoung), and Sir Min Jung Ho (Ji Jin-hee).

Lady Jung, one of the key protagonists, is first seen singing and joking with the young kitchen girls in training. She has spent the past ten years in a menial position in the sauce pantry, and she comes across as mild mannered, even passive. Consequently, the Choi family, unable at the time to place one of their own in the position of highest kitchen lady, plans to install Lady Jung in that position as a puppet for them to control. Once Lady Jung assumes the position, however, we see this seemingly docile woman’s iron will take charge of the kitchen, which she is determined to run according to her own exacting standard: The purpose of the kitchen is to prepare nutritious and delicious food, bringing good health and happiness to those who eat it. Contrary to the Chois’ plans, Lady Jung will not permit the kitchen to be used as a battleground for palace politics. At the first meal prepared under her leadership, Lady Jung encourages the kitchen ladies to practice their skills diligently because she will ultimately hand her position only to the most talented—not the highest ranking or most politically connected.

Keum Young, slightly older than Jang Geum, is a kitchen lady in training as well. Talented, ambitious, and competitive, Keum Young is the youngest girl in the powerful Choi family, and she is being groomed to become highest kitchen lady. Because of her skill and connections, she has a special place in the kitchen and is trained in more advanced cooking methods. She is initially friendly and even helpful to Jang Geum; however, as she watches Jang Geum’s abilities blossom, Keum Young feels her place as star pupil threatened and becomes increasingly jealous. Further fueling her animosity toward Jang Geum are a mutual love interest in Sir Min, and Keum Young’s family, who ultimately call on her to betray Jang Geum and Sir Min.

Keum Young is constantly torn between what she knows is right and what her family demands, and her steady degeneration is a tragic depiction of the consequences of moral compromise. In one scene she agrees to place in the vicinity of the queen an evil charm that is supposed to change the prince in the queen’s womb into a princess, thus protecting the Chois’ position of power. Keum Young does not want to do something so dishonorable and initially refuses. But she finally acquiesces to the pressure from her family and reluctantly carries out the task after vowing that when she becomes highest kitchen lady, she will put an end to such repugnant practices. She soon discovers, however, that in order to protect the position she unjustly obtains, she will have to engage in even more horrendous crimes, resulting in a downward spiral that eventually destroys this initially virtuous girl.

Late in the series, looking back on her life, she acknowledges to herself that she was neither fully true to her own values (honesty and integrity) nor fully obedient to the demands of her family. Her evasions and compromises have destroyed her soul, and she leaves the palace an empty shell of a person.

Amid the dramatic events, power struggles, and palace politics, a beautiful and moving love story develops between Jang Geum and Sir Min. We first encounter Sir Min in his capacity as an expert military officer, fighting to protect the country. After their initial and anonymous encounter, in which Jang Geum saves Sir Min’s life without either of them seeing the other’s face, they officially meet in the palace when Jang Geum visits the library where he studies. Sir Min is at first intrigued by a simple kitchen lady who frequents the library eager to read the classics of Korean literature and philosophy. As the story unfolds, we see his esteem for her grow as he admires her intelligence, courage, and tenacity.

In a particularly moving scene, after Jang Geum has suffered a gross injustice that utterly demoralizes her, Sir Min reminds her what this means and what really matters. “It is just another obstacle for you. It is the obstacle of people. As you accomplish more and more, and as your medical skills get better with time, the obstacles may grow bigger. You must overcome it. No matter what great achievements you accomplish, if you cannot overcome [the obstacle of people] you will crumble down. . . . Brush off the dirt and stand up again. I do not like the weak [Jang Geum]. You must stand up.”

Less important to the story, but worth mentioning (along with a caveat) are Jang Geum’s adopted parents. Their role is largely that of comic relief, which is indispensable to the often-tense drama. Viewers may initially find the antics of these quirky characters annoying, particularly their stylistic overacting. But as the story develops, viewers will come to love the parents, not only for their offbeat humor, but also for their devotion to and protection of Jang Geum.

The acting in the series in general is highly stylized and more like stage acting than film acting, which is an asset to the production. The ideas conveyed and emotions evoked in this story are broad and sometimes complex, and the actors need every technique at their disposal to perform effectively.

The only significant weakness in the epic is that the first few episodes, in which much necessary background is established, provide no indication of the drama, excitement, and heroism to come. By the end of episode 4, however, the viewer is likely to be hooked, and, if so, he is in for a life-changing experience.

Sarah Biddle is the general manager at The Objective Standard. Before joining TOS, she taught literature, language arts, history, and math at VanDamme Academy and LePort Schools in Southern California.
View all posts by Sarah Biddle →
The Montessori Method: Educating Children for a Lifetime of Learning and Happiness
An Interview with Philosopher of Science David Harriman
Return to Top