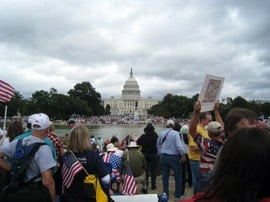 With a showdown over the budget looming, The Tea Party has one clear message to the GOP: “Cut it or shut it.” As the Washington Times reports:

[H]undreds of tea partyers gathered across the street from the Capitol for a “Continuing Revolution” rally, sponsored by the Tea Party Patriots, where they waved signs that read “Grow a spine” and “Remember your promises, we do,” while calling on the Republicans to follow through on their campaign pledge to cut $100 billion in spending before Sept. 30, the end of the fiscal year.

“Cut it or shut it,” many in the crowd chanted, airing a lingering frustration that has been compounded by news reports suggesting that Republicans are hashing out the details of a deal with Democrats that would slice $33 billion in this year’s spending, a cut that falls far short of the party’s pledge.

The Tea Party’s demand of “cut it or shut it” is a principled stand that the GOP should heed and adopt. The U.S. government’s immoral spending is pushing the country toward a fiscal disaster, which can be averted only by major cuts.

Tea partyers are coming to understand that the government has no right to spend the hard-earned money of Americans on bailouts, welfare, and the like. Hopefully, they will soon grasp this truth in terms of the relevant principle: The only proper purpose of government is to protect individual rights by banning force and fraud from social relationships.

Republican politicians are not so quick to learn. They have not yet begun to grasp the moral impropriety of spending, and they may not for some time. But perhaps with increasing pressure from tea partyers they will at least begin to see that major cuts in spending are their ticket to remain in office.