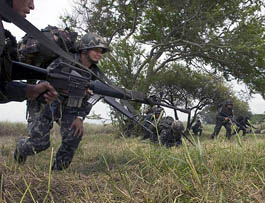 Mark my words: to those of you who perpetrated this atrocity, know that you are now number one on my radar… make no mistake about it: you will be brought to justice to answer for your crimes…

Unfortunately the same government has also indicated that the military, in its hunt for the butchers, will avoid Muslim communities so as not to “disrupt the observance of the Muslim holy month of Ramadan.”

Now, where might these killers hide? (One might hope this is a ploy to lull them into complacency, but I suspect such hope would be in vain.)

The government should hunt down the murderers­­—wherever they are and regardless of Ramadan or Muslim feelings—and more, it should use the full force of the Philippine military to destroy every vestige of the Abu Sayyaf before these monsters have time to commit another atrocity.