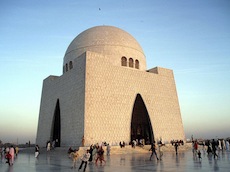 The Obama administration has halted $800 million in military aid to Pakistan. In a CNN op-ed, Kori Schake argues against this, and claims that to destroy “violent Islam” the United States needs Pakistan’s help. She further claims that Pakistan’s unwillingness “to function with U.S. interests in mind argues for more, not less, assistance.”

In other words, the United States should bribe the Islamic regime in Pakistan to work with the good guys in the war against Islamists. But in fact, America does not need Pakistan’s cooperation to destroy the Islamist threat. What America needs is to act in its self-interest and destroy all regimes that sponsor and/or harbor terrorists.

The solution to Pakistan’s belligerence is not to give the Islamic regime more money. (The United States has given billions upon billions of dollars in military aid to Pakistan since 1956, with the aid in 2010 alone totaling $2.5 billion.) Rather, the solution is for the U.S. government to give the Islamic state an ultimatum. The United States should inform Pakistan that the U.S. government’s only purpose is to protect the rights and security of Americans, and that if Pakistan stands in the way of that goal, the U.S. military will regard the regime as an enemy and treat it accordingly.