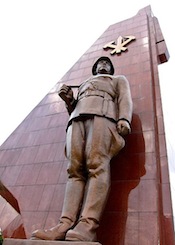 The Agence France-Presse reports that North Korean defectors recently testified in front of a U.S congressional panel, recounting the horrors they experienced under the communist regime. One of the defectors, Kim Hye-Sook, who was taken to a prison camp when she was 13 because her grandfather had escaped to South Korea, said that in North Korea, “human lives are worth less than those of flies… many people suffered and died because of starvation in the prison camp.” Further she said: “There was a time when I saw the bodies of people who were killed by firing squad who were rolled up in straw mats and carried away in carts, and said to myself, ‘Even dogs will not die so pitifully.'”

Another defector, Kim Young-Soon, said: “I wasted nine years of the prime of my life in that hellhole of a place where even animals will turn their faces away.” She urged the United States to isolate Kim John il, saying: “As long as he exists, people’s suffering will continue.”

North Korea recognizes no human rights: It is a slave pen.

If the United States were to act in its self-interest, as it should, and end the North Korean regime—a regime that has nuclear weapons, is pursuing missiles with the capability of reaching America, and desires a “sacred war” with the United States—one fortunate bonus would be that such action would liberate an entire nation from communist enslavement.

A military strike to destroy Kim Jong il and his communist regime is long overdue.

Gary Johnson on Democracy vs. Republic
Of Saudi Savages and American Children
Return to Top