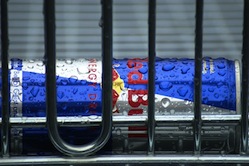 Senate Majority Whip Dick Durbin (D-Ill.) is calling for the FDA to impose new regulations that would limit caffeine levels of energy drinks, on the grounds that consuming large quantities of caffeine has “health consequences.”

Businessmen and consumers have a moral right to act on their own judgement, so long as they do not use physical force or commit fraud. Companies that sell energy drinks voluntarily trade value for value with their customers, and the companies are legally forbidden to commit fraud. The customers know that drinking too much caffeine is unhealthy, and their right to act on their judgment includes the right to consume large quantities of caffeine if they so choose.

The only thing that needs to be regulated or limited today is the power of the government.