View cart “Review: Double Cross, by Ben Macintyre (pdf)” has been added to your cart. 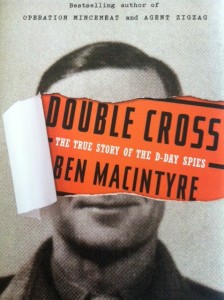 Two months after D-Day, an agent working in Britain received a message from his Nazi handler that said, in part:

With great happiness and satisfaction I am able to advise you today that the Führer has awarded the Iron Cross to you for your extraordinary merits, a decoration which, without exception, is granted only to front-line combatants. For that reason we all send you our most sincere and cordial congratulations. (p. 335)

The agent wrote back in the same emotionally verbose style for which he was known.

I cannot at this moment, when emotion overcomes me, express in words my gratitude for the decoration conceded by our Führer, to whom humbly and with every respect I express my gratitude for the high distinction which he has bestowed on me, for which I feel myself unworthy as I have never done more than what I have considered to be the fulfillment of my duty. Furthermore, I must state that this prize has been won not only by me but also by other comrades, who, through their advice and directives, have made possible my work here, and so the congratulations are mutual. My desire is to fight with great ardour to be worthy of this medal, which has only been conceded to those heroes, my companions in honour, who fight on the battlefront. (pp. 335–36)

Unbeknownst to the handler, the agent’s reply contained little truth and a lot of falsehood.

The biggest lie was that the agent felt a deep sense of gratitude toward Hitler. In truth, this recipient of the Iron Cross was a double agent working in earnest for Britain. Although he had no love for Hitler, however, he did have a very active imagination. In fact, over the course of WWII, he created an elaborate fictional world, including multiple identities for alleged spies he supposedly recruited to the Nazi cause. Each of these spies had unique motivations, fears, and requests. And because the agent played them all so expertly, his handlers in Britain gave him the code name Garbo (after the famous actress).

The element of truth in Garbo’s response to receiving the award was that he saw himself as part of a team . . . one working to defeat the Nazis.

In Double Cross: The True Story of The D-Day Spies , Ben Macintyre tells the exciting story of that team, including both how it was formed and how the individuals involved worked together toward the successful start and conclusion of D-Day.

This book is a follow-up to Macintyre’s Operation Mincemeat: How a Dead Man and a Bizarre Plan Fooled the Nazis and Assured an Allied Victory , which I reviewed in the Summer 2011 issue of TOS. Readers who enjoyed that book are likely to enjoy this one even more.

One reason is that they will have a fuller understanding of the people involved and their various motivations. Another is that they will be able to enjoy the nature of this attempt to deceive the Nazis by contrast to the ingenious one that preceded it. However, although having read Operation Mincemeat might prepare one to enjoy Double Cross more, the former is not a prerequisite for the latter. In fact, Macintyre explains the relation between the two operations adequately in the following two sentences:

The successful deception surrounding the Sicilian landings in 1943 had persuaded the Germans that the most likely target was not the real target. Now the aim was reversed: Hitler must be made to think that the most plausible target really was the target. (p. 4)

More specifically, the goal of the Allied forces was to convince the German High Command that the main thrust of their next large-scale attack would be in Calais, situated at the point closest to the British coastline in the northeast of France. But the Allied forces would actually launch their invasion in Normandy, which, from the vantage point of their commanders, seemed to offer the chance of success—so long as Nazi Germany’s other divisions were not prepared for them and did not center in on them once the attack began.

The goal of the grand deception that Macintyre details in Double Cross was to keep the divisions that were not in Normandy from coming to the aid of the Nazis. Macintyre weaves myriad elements into this larger drama, including, importantly, “a Polish patriot, a Peruvian gambling girl, a French dog-lover, a Serbian playboy, and a Spanish chicken farmer” (p. 336). He shows, for example, how they came to work for MI5, the British Secret Service; what the specific dangers of their job were; and what kind of information they passed along to the Nazis. He also shows how the ratio of damaging lies to harmless truths that the agents passed along increased dramatically once the intelligence officer who was in charge of them realized that he controlled not just some but all of the Nazi spies in Britain.

As readers will see, if these agents could properly be described as daring before this realization, the lies they tell after it almost require a new word—because they become increasingly absurd and gigantic.

Indeed, as Macintyre shows, the lies changed the course of the war. One series of lies tricked the Nazis into paying MI5 not only for the spies but also to cover the costs of the whole supporting unit that was feeding them negative information. Another series of lies tricked the Nazis into believing that General Patton was waiting just across from Calais with a huge army, ready to attack at any moment.

Such packs of lies, combined with the people who told them, the creativity behind them, and the huge amount of brainpower required to keep everything consistent, make Double Cross an interesting, enjoyable, and occasionally thought-provoking read.

The book has one flaw that readers should be aware of: In the second major photo insert, a caption to one of the photos reveals the fate of an important character. I felt like someone punched me in the gut when I saw it. If you read the book, you might want to hold off on viewing those photos until after you finish it.

Apart from that, I have only praise for this book. Macintyre is an excellent storyteller and writer, and Double Cross is his best book to date.

Daniel Wahl is assistant editor at The Objective Standard.
View all posts by Daniel Wahl →
Review: The Secret Lives of Codebreakers, by Sinclair McKay
Review: Lunch Break, by Quent Cordair
Return to Top