Stop letting the enemies of capitalism claim the moral high ground. There is nothing noble about altruism, nothing inspiring about the initiation of force, nothing moral about Big Government, nothing compassionate about sacrificing the individual to the collective. Don’t be afraid to dismiss those ideas as vicious, unjust attacks on the pursuit of happiness, and self-confidently assert that there is no value higher than the individual’s pursuit of his own well-being. (p. 220) 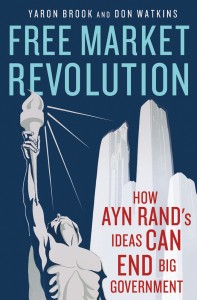 So write Yaron Brook and Don Watkins in Free Market Revolution, a rallying cry for the morality of capitalism and the self-interested pursuit of profit.

The book is ambitious: In 221 pages of text (excluding front and back matter), the authors seek to explain the nature of capitalism, to define and defend its moral foundation of self-interest, to describe how it has suffered decades of assaults not only from “Progressive” leftists but from altruistic conservatives, and to sketch a road map for instituting genuine, laissez-faire capitalism in America.

Part I devotes four chapters to describing “The Problem,” beginning with how governmental powers have continually expanded over the past century and a quarter. Drawing on language formulated by their former colleague at the Ayn Rand Institute, Alex Epstein (now the director of the Center for Industrial Progress), the authors next discuss “the argument from greed and the argument from need,” the two major claims made for expansive government. Part I closes with a chapter on the housing meltdown, illustrating the points of previous chapters.

Part II, “The Solution,” defends rational self-interest and the profit motive, reviews the basic economic case for free markets, recounts the injustices and harms of the regulatory state and the “entitlement” state, and illustrates these points in a chapter devoted to the ailing health-care system. The final chapter explains why “a mixed morality leads inexorably to demands for a mixed economy” (p. 215)—and argues for a consistent morality of rational self-interest and a consistent politics of capitalism.

Although the authors leave unmentioned several important questions that one might expect to see addressed in such a book, they succeed spectacularly in addressing the issues they do field. The book, divided into fourteen short (six to twenty-three page) easy-to-digest chapters, is a joy to read. Even as it merges hefty philosophical arguments, detailed discussions of key economic concepts, and numerous historical examples, its light and breezy prose enables quick reading.

Many of the book’s formulations are gems. Consider this: “Business is not a feudal manor but a fellowship of traders” (p. 98). Or this: “[T]he most important way the division of labor makes us more productive is by enabling us to leverage human intelligence” (p. 139). Or this: “The entitlement state is not a safety net but a spiderweb that ensnares and strangles rational, productive, creative, ambitious individuals in order to dole out unearned rewards to the irrational and unproductive” (p. 192).

• The “argument from greed” presumes that profit-seeking businessmen are evil and that they therefore must be restrained by the regulatory state.

• The “argument from need” presumes that one person’s need imposes a claim on the productive output of others, giving rise to an alleged “right” to health care, education, retirement funds, and the like.

• The basis of both the argument from greed and the argument from need is altruism: the moral code of self-sacrifice. Altruism presumes that self-interested profit seeking is inherently evil and, therefore, that profit seekers must be muzzled and wealth producers looted.

• In the context of a free market, actual selfishness—rational selfishness—consists not of Bernie Madoff-style exploitation of others but of “mutually beneficial production and trade” (p. 67) and the attendant virtues of honesty and integrity, among others.

• “Capitalism is, at its core, the economic system based on the individual’s right to seek his own happiness” (p. 42).

In general, the book is written extremely clearly. The only unclear paragraph that stood out to me asserts that the “profit seeker” spurns “unearned money” (p. 77). This section fails to distinguish between legitimate gifts and winnings, such as an inheritance or a prize drawing; and illegitimate gains, such as those “mooched from overly generous relatives” (p. 77).

Free Market Revolution also leaves unaddressed some important lines of anticapitalist argument. For instance, although the book forcefully argues for private property and against regulations, it does not address concerns about so-called “public goods”—roads, schools, parks, and the like—and why these would be plentiful and largely well-managed when fully and exclusively private. The authors mention in passing that laissez-faire capitalism requires the privatization of roads (p. 217), but they do not address the concerns that commonly accompany this idea. Given its ambitious scope and relative brevity, however, the book may be forgiven such shortcomings.

Free Market Revolution could not have come at a better time. Given America’s continued economic troubles and ballooning debt, President Obama’s continuous calls for “spreading the wealth around” and controlling businesses, and Paul Ryan’s injection of Ayn Rand’s ideas into popular discourse (however much Ryan strays from those ideas), Americans are both desperately in need of a principled defense of capitalism and, in many cases, eager to hear it.

Free Market Revolution is well worth buying and reading—and more, it is worth promoting among Tea Party activists, business leaders, students, and anyone concerned with freedom and open to reason.

Ari Armstrong blogs at AriArmstrong.com, and he has written for publications including the Denver Post and Complete Colorado. He is the author of Values of Harry Potter: Lessons for Muggles, a book exploring the heroic fight for life-promoting values in the Potter novels.
View all posts by Ari Armstrong →
Robert Zubrin on the Scourge of Antihumanism
Review: The Financial Crisis and the Free Market Cure, by John Allison
Return to Top