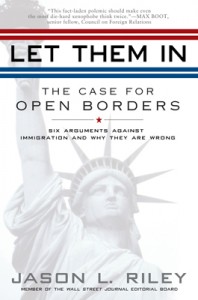 Jason Riley’s Let Them In is a treasure trove of facts and analysis. The book covers many facets of the immigration debate, including economic protectionism, cultural assimilation, and national security. Riley identifies his two major themes early in the book: “The first is that, contrary to received wisdom, today’s Latino immigrants aren’t ‘different,’ just newer. The second is that an open immigration policy is compatible with free-market conservatism and homeland security” (p. 12).

Each chapter of Let Them In addresses a particular anti-immigration argument, including its present-day and historical manifestations and its major advocates. For each argument, Riley provides evidence and analysis to the contrary.

Representative of this approach is his chapter describing efforts of environmental groups that oppose immigration based on their desire for zero population growth. Here, Riley lays out their “arguments” against immigration and identifies key figures such as Thomas Malthus, Paul Ehrlich, and John Tanton. Malthus and Ehrlich, explains Riley, have respectively predicted the destruction of the human race and the earth as a result of increased human population. Tanton has founded or helped to fund several anti-immigration organizations over the past few decades, and Riley reports that Tanton is not only a zero-population-growth environmentalist with ties to groups such as the Sierra Club and the Audubon Society, but also an associate of known white supremacists and advocates of eugenics. The worldview of these environmentalists, writes Riley, can be summed up in the phrase “people are pollution” (p. 30).

Riley begins his rebuttal of their arguments by citing a mature Malthus rejecting his earlier predictions of impending doom. Apparently, Malthus wrote many editions of his popular essay predicting population-induced catastrophe (An Essay on the Principle of Population), but only the first edition, which contains the least-optimistic predictions, remains popular today. Riley, however, cites the fifth edition in which Malthus not only argues that there is hope for a “gradual and progressive improvement in human society,” but also attributes the source of this hope to “the laws of property and marriage, and to the apparently narrow principle of self-interest” (pp. 31–32). Riley further cites the work of several modern economists and historians, such as Julian Simon, who explain how human thought and effort have increased wealth and well-being while human population has skyrocketed.

The idea that “human resources rather than natural resources . . . are the mainspring of wealth, not to mention survival” (p. 37) is also an important principle of the two chapters addressing economic arguments against immigration.

Riley approaches anti-immigration arguments based on concerns about cultural assimilation by explaining that these arguments, which are currently invoked against Latin American immigrants by the likes of Pat Buchanan and Heather Mac Donald, were earlier invoked against German immigrants by Benjamin Franklin in the 1700s and against Irish immigrants by Samuel Morse in the 1800s. Riley argues that many nativists are looking for the wrong kind of assimilation—namely, assimilation to U.S. cultural norms rather than more fundamental values, such as hard work and freedom. He further argues that concern over whether immigrants are assimilating is usually misguided because it overemphasizes the behavior and skills of new immigrants but does not acknowledge the positive changes in immigrants who have been in the United States for some time.

Likewise, the other chapters place the immigration debate in a rational context and demand that the full historical record be taken into account when making arguments.

Let Them In does have some notable flaws. All of Riley’s arguments are based on creating the most economic value for “the greater good.” He does not argue for the moral rights of would-be immigrants to move where they choose or the rights of businessmen to hire whom they choose; nor does he highlight the irrationality of the notion that a particular job “belongs to” Americans. In fact, Riley never mentions individual rights (except in passing when quoting others)—not even when he identifies “individual initiative and individual opportunity” (p. 154) as the uniquely American values that draw immigrants to the United States. The closest Riley comes to a discussion of the moral propriety of an open immigration policy is his observation that after the enactment of the North American Free Trade Agreement, “we liberated the cross-border flows of capital, goods, and services, [but] we persisted in trying to stop the free movement of people” (p. 211).

Another flaw is that Riley does not always provide citations for data that ought to be cited. For instance, he claims “that Ehrlich has said all U.S. aid to developing nations should be conditioned on the sterilization of Third World fathers with more than two children” (p. 21), but he provides no source. Likewise, he reports that “ecologist” Garrett Hardin said “the freedom to breed will bring ruin to all” (p. 21), but, again, he provides no source. Such quotes would be helpful tools for showing the corrupt natures of the environmentalist and anti-immigration movements, but, without sources, the reader is left with the burden of verifying these statements, and, in some cases, may be unable to do so.

Its flaws aside, Let Them In is a valuable book. Riley presents a robust economic argument that provides powerful support for the propositions that individuals should be free to move wherever they choose and businesses to hire whomever they see fit.