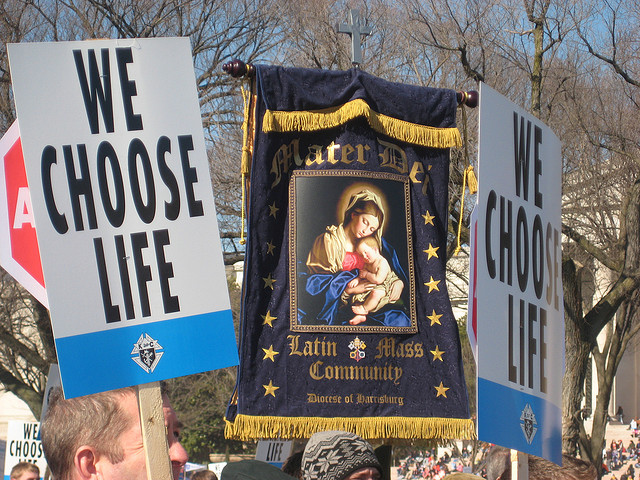 In the midst of this crusade, it is crucial for Americans to understand and emphasize that abortion bans are not “pro-life” but anti-life. The genuine pro-life position holds that a woman has the right to choose an abortion.

Outlawing abortion would violate the rights of—and thus damage the lives of—women and their partners and doctors. Among other rights violations, abortion bans would force pregnant women to carry the fetus to term, even in cases of rape and incest, and even at risk to the woman’s life or health; outlaw common types of birth control that might prevent implantation of an embryo; outlaw common fertility treatments that result in the destruction of unused embryos; and preposterously treat women who get abortions as murderers.

On the basis of religious dogma (or other mystical “insights”), those who advocate abortion bans seek to sacrifice the actual person—a pregnant woman who wishes to get an abortion—to the potential person—an embryo or fetus.

The ralliers and most anti-abortion advocates explicitly ground their protest on religious beliefs. For example, the “March for Life” organization behind the rally invokes “the law of God” for its cause. Only religious dogma or the like, not reality-based morality, can declare a clump of largely undifferentiated cells living within the body of a woman to be a person with full legal rights, on par with a born infant.

That abortion bans threaten and sometimes end the lives of women became obvious to Savita Halappanavar and her loved ones, when Halappanavar died after being denied a life-saving abortion in Ireland because of the anti-abortion laws there.

“March for Life” is quite explicit that the abortion ban it favors would kill some women in cases of medical emergencies. However, the organization holds, “no value distinction shall be made between the value of the life of one individual and of another”—here referring to an embryo and a woman. “March for Life” openly recognizes that, under its favored policy, women’s lives “may be lost.” Although regrettable, they maintain, this is the way it must be. In their words:

[T]he guiding principles are that no innocent human may be intentionally killed in an effort to save another human, and that it shall not be predetermined by law that one human life may be sacrificed to save the life of another human. Any decision about who may be saved must be made on a case-by-case basis, taking into consideration the total circumstances, and trying to save as many humans as possible. . . . Although a pregnant mother and/or her preborn child may die, there is no justification in the law of God or man for the intentional killing of even one innocent born or preborn human in existence at fertilization. NO EXCEPTION! NO COMPROMISE!

In other words, according to the abortion ban favored by “March for Life,” a woman may not get an abortion even if she is certain to die if she does not, unless perhaps the authorities make a “case-by-case” exception on grounds such as that the fetus would die anyway. If carrying a pregnancy to term would “merely” permanently maim or disable the woman, then, according to the asininely named “March for Life,” she must be legally forbidden from getting an abortion.

For a clear explanation of the moral basis for a woman’s right to choose an abortion, see “The Assault on Abortion Rights Undermines All Our Liberties,” by Diana Hsieh and me. Here are a few key passages:

Rights are not implanted by God in zygotes at conception, nor are they innate possessions or properties of human beings. Rights are factual requirements of human survival and flourishing in society. They apply only to human beings living and acting as individuals in a social context—not to embryos or fetuses in the womb. . . .

A “right,” as Ayn Rand observed, is “a moral principle defining and sanctioning a man’s freedom of action in a social context.” The purpose of this principle is to identify the fundamental actions that an individual must be free to take to live as a human being—actions such as living one’s life as one sees fit (the right to life), acting on one’s judgment (the right to liberty), keeping and using the products of one’s effort (the right to property), and expressing one’s ideas (freedom of speech). A person’s rights, when recognized and protected, enable that individual to act free of forcible interference from other people.

A woman is morally entitled to the protection of rights because she is an individual, a person in her own right, who must think and act freely in order to live. An embryo or fetus in the womb, in contrast, is not an individual. It is a wholly dependent being, contained within and supported by the body of the pregnant woman. The fetus does not act independently to sustain its life, not even on the basic biological level possible to a day-old infant. It does not breathe independently, eat independently, move independently, or even defecate independently. The fetus cannot know or interact with the world outside the womb in any meaningful way. It is not an individual member of society, but rather a part of the pregnant woman. None of this changes until the fetus departs from the woman’s body at birth and thereby becomes an individual human person.

(The entire article can be read with a subscription to The Objective Standard or by purchasing a PDF of the essay.)

March for Life and others advocating abortion bans are anti-life, anti-rights, anti-reason—their puffed-up pretense notwithstanding. In the abortion debate, the only side logically deserving of the “pro-life” mantle is the side that recognizes and upholds a woman’s right to life, which includes her right to choose abortion.