View cart “Review: Priceless: Curing the Healthcare Crisis, by John C. Goodman (pdf)” has been added to your cart. 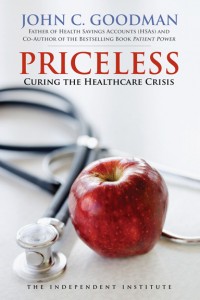 Think about the health-related services you or your family need occasionally, if not regularly—doctor visits, hospital stays, casts, surgeries, health insurance. When was the last time you saw a meaningful price for any of these?

This is the question with which health-care economist John C. Goodman kicks off his critique of the American health-care system in Priceless: Curing the Healthcare Crisis. Goodman points out: “[F]ew people ever see a real price for anything. Employees never see a premium reflecting the real cost of their health insurance. Patients almost never see a real price for their medical care. Even at the family doctor’s office, it’s hard to discover what anything costs” (p. 1). On the supply side, health-care providers are not paid real, market-clearing prices; they are paid according to reimbursement schedules that are either set by the federal government or heavily influenced by it due to the enormous size and presence of Medicare and Medicaid—the two “entitlement” programs that make the federal government the single largest payer for health care in the country.

When buyers and sellers are free to act and thus contract in accordance with their own judgment, they negotiate prices that communicate valuable information about prevailing and expected supply and demand of goods and services. Such prices are critical for encouraging suppliers to meet consumers’ needs, for encouraging consumers to spend their money prudently, and for helping both sides avoid shortages and gluts. Such prices, Goodman points out, are largely absent in the health-care industry—precisely because buyers and sellers are not free to act on their own judgment. Instead, producers and consumers of health services face myriad controls. To take but two examples, federal tax policy promotes employer-subsidized insurance, and entitlement programs put federal bureaucrats in charge of pay schedules for medical services.

Goodman shows that the lack of meaningful prices drastically distorts the behavior of consumers. For example, because most consumers pay for health care using third-party health insurance purchased through their employers with pretax dollars, only about ten cents of each dollar spent at the point of care comes out of their own pockets. Individuals, therefore, have an incentive to consume more health care than they would if they were paying for more of it directly. Government-mandated “free” preventive care is a further assault on the price system and a further distortion of demand signals. As Goodman writes, “[I]f the cost of these services to us is zero at the time we consume them, our incentive will be to consume them until the last bit is almost worthless” (p. 69).

Goodman also shows how the lack of meaningful prices distorts the behavior of producers. “In normal markets,” he observes, “entrepreneurs make profits by figuring out how to better solve other people’s problems” (p. 215). Doctors, however, are prevented by law from repackaging or repricing their services for Medicare patients, even if doing so would be better for the patients. Insurers are required to price their policies in conformance with government-set “rate bands” that limit the amount insurers can vary premiums based on a customer’s risk profile and health status. For example, one age-related rule limits premiums for older, more costly enrollees to no more than three times what younger, healthier adults are charged. Wherever one looks in health care, entrepreneurs are hampered from determining which problems need innovation and capital investment most urgently.

Who broke the American health-care system? According to Goodman, politicians from both political parties are responsible for the mess, having failed to understand the importance of prices and—more importantly—having propagated two main false beliefs in Washington and throughout the culture.

The first false belief is the notion that price is a barrier to care and thus that in order for people to get the health care they need, price must be removed from the equation. Advocates of this idea hold that health insurance policies ought to have little to no deductible or co-payment, so that medical care is virtually free at the point of delivery. This notion has infiltrated public policy in many forms, including a provision in the Affordable Care Act (ACA) that requires insurers to offer coverage for routine primary care, annual wellness exams, and other preventive services at no additional out-of-pocket cost.

The second false belief is that in order to make health insurance affordable for everyone, government must require insurers to charge everyone essentially the same premium, regardless of an individual’s health status. This idea has been implemented via the ACA, for example, through a provision that prevents insurers from considering a host of relevant health factors that they otherwise would consider when determining the price of coverage. Insurers selling to individuals and small employers are permitted to consider some health factors, such as tobacco use, but they are forbidden to consider countless others, including overall health status, prior health expenditures, and occupation.

Drawing on his own extensive research of health-care markets and the research of other experts around the world, Goodman discusses how we can liberate individuals and institutions so that prices and incentives can work the way they are supposed to work. Among other things, Goodman advocates loosening restrictions on health savings accounts (HSAs) and special tax-advantaged, individually managed, chronic care accounts (p. 147). He calls for permitting Medicare and Medicaid patients to use walk-in retail clinics “where prices are being set in a real marketplace” (p. 229). He recommends reforming the tax code so that consumers can move freely between the individual and group insurance markets without losing their exemptions (p. 217). He advocates freeing insurers to set prices based on consumers’ actual health status and risk and repealing current mandated coverage laws.

A downside to Goodman’s tour of the health-care landscape is that, because it touches on so many proposals, some get scant treatment—just one or two short paragraphs—rather than a meaningfully detailed description of what a proposal would entail or how it would work in practice. For example, referring to an idea for creating a market for the care of the sick, Goodman writes, “[W]e should adopt a system that compensates [insurers] for the higher expected costs—ideally, making a high-cost enrollee just as attractive to an insurer as a low-cost enrollee” (p. 295). Who would do the compensating? How would it work? Is this a temporary fix or a permanent one? He does not say.

At times, Goodman’s inclusion of so many recommendations also results in him dispensing with objections too briskly. For example, in response to the reasonable concern that too few people would be able to adequately fund HSAs for them to be reliable vehicles for self-insurance, he writes merely, “If that’s true, they cannot afford to pay premiums either. The issue is: Whatever people can afford, how should it be divided between third-party insurance and individual self-insurance?” (p. 148). Such statements hardly address the essence of people’s concerns.

The most serious problem with Goodman’s book, however, is that it never clearly identifies the underlying principle necessary to fully defend freedom in health care: that each individual has a right to act and contract according to his own judgment, so long as he does not violate the rights of others. He does argue that consumers and producers should decide for themselves what is in their best interest (rather than empower the government to do so for them), but he does not explicitly ground his recommendations on the principle of individual rights.

Despite these weaknesses, Priceless is an extremely valuable book on health policy that will help readers understanding why and in what ways current health care-related regulations wreak havoc on the health-care economy—and how activists can work toward a freer market.

Jared Rhoads is a health-policy instructor at the Dartmouth Institute for Health Policy and Clinical Practice and a visiting research fellow in health policy with the Mercatus Center at George Mason University.
View all posts by Jared M. Rhoads →
Review: Righteous Indignation, by Andrew Breitbart
Review: Island, by Thomas Perry
Return to Top