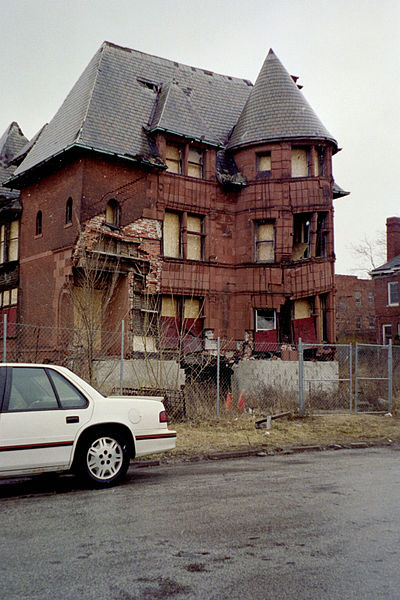 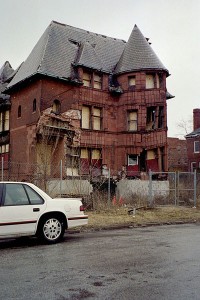 On July 18, the city of Detroit declared that it had reached insolvency, and, with $11 billion in debt, filed for bankruptcy. Since the announcement, numerous pundits have penned postmortems attempting to explain Detroit’s decline, but Daniel Hannan has gotten closest to the essence of the issue.

In his piece for the Telegraph, Hannan insightfully compares the similarities between the downfall of Detroit and that of Starnesville, a town in Ayn Rand’s novel, Atlas Shrugged. Quoting from the Observer, Hannan relayed of modern Detroit:

What isn’t dumped is stolen. Factories and homes have largely been stripped of anything of value, so thieves now target cars’ catalytic converters. Illiteracy runs at around 47%; half the adults in some areas are unemployed. In many neighborhoods, the only sign of activity is a slow trudge to the liquor store.

This decayed landscape is eerily similar to the description of Starnesville provided by Ayn Rand fifty-six years ago. Hannan provides a comparative excerpt from Atlas Shrugged:

A few houses still stood within the skeleton of what had once been an industrial town. Everything that could move, had moved away; but some human beings had remained. The empty structures were vertical rubble; they had been eaten, not by time, but by men . . . The inhabited houses were scattered at random among the ruins; the smoke of their chimneys was the only movement visible in town . . . Beyond the town, on a distant hill, stood the factory of the Twentieth Century Motor Company. Its walls, roof lines and smokestacks looked trim, impregnable like a fortress. It would have seemed intact but for a silver water tank: the water tank was tipped sidewise.

Although the town of Starnesville is fictional, it serves as a warning of the destruction wrought by a particular ideology and the regulations and wealth-redistribution schemes it demands or condones. Unfortunately, like so many people and so many governments, those of Detroit did not heed Rand’s warning. Nor does Hannan explicitly name the ideology at play.

Let’s look at some telling facts and name that ideology.

When Atlas Shrugged was published in 1957, Detroit was a far cry from the Starnesville it is today. In fact, “Motor City,” as it was called, was the heart of the auto manufacturing industry and one of America’s iconic boomtowns. During the late 1950s and early 1960s, the city boasted one of the highest per capita income rankings of metropolitan areas in the United States. At that time, Detroit and its nearly two million residents seemed to be headed down a path of ever-increasing prosperity. Today, however, the city has one of the lowest per capita income levels compared to other large metropolitan areas in the United States, and its population has shrunk to barely seven hundred thousand residents. In some areas of the city, entire neighborhoods have been abandoned, and dozens of factories that used to exemplify Detroit’s productivity and prosperity now sit empty and dilapidated.

As Hannan points out, Detroit’s collapse did not occur overnight. Like Starnesville, Motor City collapsed as a result of certain policies enacted by local, state, and national lawmakers—and supported by citizens and voters—over the course of several decades.

One key factor in Detroit’s collapse is decades of deference to unions. Of the city’s $11 billion in outstanding debt, $9 billion is union related, mostly in the form of pensions, Hannan notes. Over the course of fifty years, Detroit’s cartel-like labor unions worked in tandem with the city, state, and federal government to gain control over private-sector employers. (Public-sector unions did the same with their government counterparts.) As union members lobbied government to coercively increase their salaries, pensions, and power, they stifled innovation and entrepreneurship, and Detroit became an increasingly expensive and difficult city in which to do business. So, unsurprisingly, businesses left for greener pastures.

Another factor in Detroit’s decline was its substantial dependence on federal subsidies and bailouts—the most recent example being the bailout of General Motors in 2009. The auto industry’s reliance on government handouts caused it to neglect the importance of innovation and value creation. Why produce competitively when you receive lots of money for being important to the local economy and resting on your laurels?

Detroit also enacted a host of damaging tax policies in an attempt to finance the city’s big-spending agenda. During nearly six decades of decline, the city’s combination of high property taxes, income taxes, and corporate taxes drove out many of Detroit’s productive citizens and businesses, leaving a shrinking tax base to foot the ever-increasing bill.

Detroit further assaulted its citizens and businesses through the use of eminent domain laws. In one egregious instance in 1981, the city forced more than four thousand individuals from their homes and numerous businesses from their chosen locations in order to make way for a new General Motors factory.

The foregoing is by no means an exhaustive list of the policies that caused the downfall of Detroit, but it is enough to see a common denominator. What killed Detroit is collectivism—the notion that the collective (i.e., the “community” or the “union” or the “city” or the like) is the unit of moral and political concern, and thus that individuals and business have a moral duty to serve the collective. Whether it was to meet the demands of the unions, or to provide for the financial needs of crucial companies that (allegedly) couldn’t make it on their own, or to support the city’s “greater good”—individuals and businesses were forced to act against their own best judgment and thus driven from the city or throttled if they stayed.

Unfortunately, Ayn Rand’s fictional Starnesville didn’t convince enough people of this universal truth in time to save Detroit. Hopefully, the downfall of Detroit will incentivize enough people to think about the cause of the problem, identify it as collectivism, and reverse this trend before another major U.S. city becomes another Starnesville.