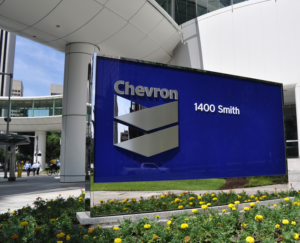 Twenty-three years after Lithuania declared its independence from the Soviet Union, Russia maintains considerable influence over the nation by controlling much of its energy. OJSC Gazprom, of which the Russian government is majority shareholder, provides Lithuania’s natural gas—which amounts to half of the country’s energy consumption.

In an effort to decrease its dependency on Russian gas, the Lithuanian government decided to sell the “rights” to explore Lithuania for shale gas—a project that would require the American-developed technologies of horizontal drilling and hydraulic fracturing (fracking).

Chevron Corporation was the only company willing to invest the ten of millions of dollars and import the cutting-edge technology and skilled employees necessary to undertake the project. And, last month, the Lithuanian Government announced to great fanfare that it had accepted Chevron’s bid.

But Chevron recently announced that it will not move forward:

Significant changes to the fiscal, legislative and regulatory climate in Lithuania have substantially impacted the operational and commercial basis of the investment decision since the company submitted its bid in January 2013.

Among its reasons for backing out, Chevron cited Lithuania’s new environmental approval procedures and threats to dramatically increase taxes on energy production. In response, Birute Vesait, Lithuania’s “minister of economy,” said, “Sure, the parliament has put a too tight muzzle on the nose.”

Chevron was willing to deliver a vital solution to the Lithuanians’ dire situation—a solution that requires knowledge and technology that few people on this planet have. But rather than provide Chevron with a legal environment sufficiently stable to make the project financially feasible, the Lithuanian government chose to treat the productive men and women of Chevron as dogs to be muzzled. So the Lithuanians will continue to depend on the puppies in the Russian government for their energy needs.

This episode of Statist Is as Statist Does offers a sober reminder that producers can function only when left sufficiently free to act on their judgment and to keep and use the fruits of their efforts. It is a lesson that not only Lithuanians but also Americans—who benefit enormously from energy produced by frackers—would do well to learn or remember.

Can You Tell the Difference Between Modern “Art” and Toddler Art?
Surprise! Construction Slows as Government Violates Rights
Return to Top