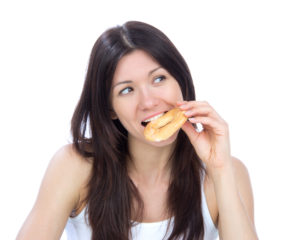 My grandparents ate Crisco—a product notoriously high in “trans” (hydrogenated) fats—daily for years, and that practice may have contributed to their heart disease (they both suffered heart attacks). I personally seek to minimize the trans fats in my diet; I eat a tiny amount a few times per year at most.

But people have a moral right to eat hydrogenated fat if they want, and producers have a right to sell it or include it in their products, so long as they don’t do so fraudulently.

No one is forcing any consumer to eat trans fats. Parents who do not want their children to eat hydrogenated fats are free not to buy it. If enough people decide to stop buying products containing hydrogenated fats, then manufacturers will stop or reduce production of them—as they already have to a large degree.

In general, adults have a right to do anything that does not infringe on the rights of others, even if it’s potentially harmful to them. Other examples include smoking cigarettes, drinking alcohol, and snowboarding.

The Food and Drug Administration is morally and constitutionally wrong to ban trans fats. It is morally wrong because doing so violates Americans’ rights, and it is constitutionally wrong because doing so violates the 9th and 10th Amendments. But the FDA has decided to do so anyway. “Condemning artificial trans fats as a threat to public health, the FDA announced Thursday it will require the food industry to phase them out,” the Associated Press reports.

Not only does a ban on trans fats violate the rights of producers and consumers, it indicates that the government has a dangerous level of power it can abuse in other ways. As Michelle Minton notes:

Since almost any food can become dangerous if consumed in excess over an extended period, this move would set a precedent for the FDA to go after other food ingredients.

And it’s not as though dietary science is obvious or easy. Various scientists and researchers criticize the government’s own dietary guidelines because (among other reasons) they encourage some consumption of vegetable oils and heavy consumption of grains.

The book Perfect Health Diet by Paul and Shou-Ching Jaminet, for example, offers substantially different dietary advice than what the government offers. It’s one thing for researchers to issue advice; it’s another for the government to force people to eat in accordance with bureaucratic opinions.

The government has no moral or constitutional right to dictate what we may and may not eat. Whether the FDA is right or wrong in a given instance regarding what is healthy or unhealthy is irrelevant. Individuals have a right to decide for themselves what they will eat.

To the Heroes Who Defend Civilized Society
Farm Subsidies Are Wrong, Regardless of Recipients’ Wealth
Return to Top