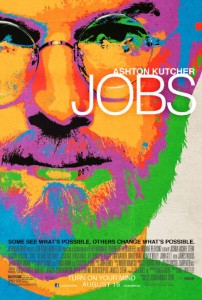 Fittingly, Jobs opens with Steve Jobs receiving well-earned applause from Apple employees for the release of the iPod, a device that would, as Jobs predicted, revolutionize the music industry. Music is just one of several industries Jobs would revolutionize over the course of his career. Although it strays from essentials at times, the film, starring Ashton Kutcher, is a stirring tribute to Jobs.

Jobs follows its namesake from his time at college to his triumphant return to Apple, focusing on three key achievements of Jobs’s career. Each of these victories highlights Jobs’s ability to recognize and encourage talent, negotiate fruitful deals, and inspire the people with whom he does business. The three achievements are:

First, seeing the enormous potential for computers with video interfaces, in 1976 Jobs put together a business to sell the Apple computer board developed by his friend Steve Wozniak.

Second, after attracting capital based on the success of the first Apple, Jobs brought Wozniak’s Apple II to market in 1977. The machine was a stunning success and brought fame and fortune to Apple.

Third, after Apple floundered with the Lisa and early Macintosh computers and company executives pushed Jobs out of the company in 1985, Jobs returned to Apple in 1996 to bring the company to new heights.

Some of the best moments of the film involve the characters speaking about their aspirations. For example, when Jobs first learns of Wozniak’s computer, he exclaims, “This is freedom to create, and to do, and to build, as artists, as individuals.” Upon Jobs’s return to Apple, industrial designer Jonathan Ive tells him:

The computer, or the walkman, or whatever it may be, should be a natural extension of the individual. And it’s that mission, that devotion to quality and ideals and heart—that’s what keeps us here. That we might do it once more.

The film ends with a touching rendition of “The Crazy Ones,” an ad originally read by Jobs. Jobs says that those sometimes considered crazy “change things; they push the human race forward.” He continues:

While some may see them as the crazy ones, we see genius. Because the people who are crazy enough to think they can change the world, are the ones who do.

Kutcher gives an outstanding performance as Jobs (complaints of some critics notwithstanding), nailing even the facial expressions and gait of the man. Other fine performances include those of Josh Gad as Wozniak and J. K. Simmons as an Apple executive.

Overall, the film ably tells much of the story of Jobs’s remarkable career and does so in a way that shows due respect to Jobs. Unfortunately, the film occasionally strays from its main focus, overemphasizing some elements of Jobs’s life and ignoring some important elements.

The film spends too much time on Jobs’s college “career” (he dropped out), his international travels, and especially his personal flaws (such as the fact that he sometimes treated his friends, lovers, and employees badly). The film could have reduced its attention to such personal details and focused more on Jobs’s productive achievements—without which there would be no reason to make or watch a film about the man.

The film spends little time showing how the Apple II became such an astounding commercial success or how it improved people’s lives. The film also totally ignores Jobs’s work with the Pixar film studio, and it only briefly mentions his work with the NeXT computer, which was critical to his return to Apple and to the subsequent success of the company. Although a biographical film must be selective in what it covers, Jobs could have covered more of what matters about Jobs if it had focused more on the essentials and pared away the nonessentials.

Despite the film’s flaws, it is a deeply moving and inspirational account of Jobs’s life. It shows how Jobs sought to make a “dent in the universe”—and proceeded to do so.