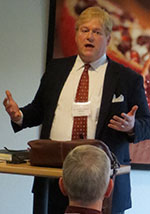 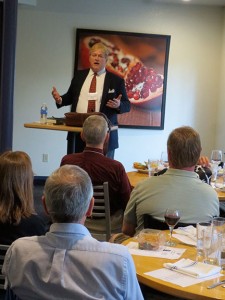 Imagine being able to keep an extra 12.4 percent of every paycheck to spend or invest according to your own judgment. Imagine if, rather than seize that portion of your paycheck to finance Social Security, government recognized your moral right to that wealth.

Recently, when economist Richard Salsman gave a talk I attended at the Hungry Minds forum in Colorado, he mentioned that, in 2011, he’d written about a plan to end Social Security immediately and replace it with privately held accounts. It’s a workable plan that deserves a wider hearing.

Salsman explains how his plan would work:

[I]mmediately [the elderly will] be given an account in their name that’s full of U.S. Treasury bills [T-bills] and bonds, whose worth equals the present value of what they’d otherwise receive in Social Security checks for the likely balance of their lives. They can do what they wish with their new account: cash it out now, slowly liquidate it over time, perhaps buy an annuity, or keep most of it as is. Second, tell the young and the middle-aged they will no longer have to pay the 15.3% payroll tax [the portion of the payroll tax for Social Security, combining the employer and employee contributions, is 12.4 percent], and they too will immediately receive an account in their name with U.S. Treasury bills and bonds, based on what they’ve already paid in so far. They too can do what they wish with their sudden investment windfall. Social Security, no longer empowered to tax payrolls or send retiree checks, would then be closed overnight.

Of course, these T-bills and bonds would not reflect the creation of additional real wealth—they would be tacked onto the national debt, to the tune of some $23 trillion dollars, by Salsman’s estimate. But as Salsman argues, reflecting the U.S. government’s Social Security promises (which are “unfunded liabilities”) in the national debt would merely convert the government’s implicit debt to explicit debt.

In his article, Salsman does not spell out the possible implications of his plan for the tax burdens of workers in the future, but they are worth mentioning here. Assuming the U.S. government ever pays off its debt, it can do so only by collecting more money in taxes than it spends (unless it resorts to paying off the debt with inflated currency). Thus, although under Salsman’s plan the Social Security tax would be eliminated, the U.S. government might be tempted to raise income (or other) taxes to pay down the debt.

Further, if passed in conjunction with substantial reductions in federal spending, Salsman’s plan for ending Social Security could and should accompany a steady reduction in the national debt without higher taxes of any kind.

Of course, Salsman’s plan is not the only feasible one for ending Social Security. A proposal I have often touted is to slowly increase the pay out age for Social Security benefits such that, over the span of a few decades, the program and its tax would be phased out. That plan would leave current Social Security recipients unaffected while splitting the pain of phasing out the program between those approaching retirement and young workers. Obviously, that plan would not increase the national debt, as does Salsman’s plan. Each plan has its strengths and weaknesses.

Whether or not government ends Social Security, rational morality (not to mention basic economic sense) demands that it do so. Individuals have a moral right to use their wealth as they judge best, to invest (or not) according to their goals and values, and to use sound investment instruments (as opposed to government transfer programs) to plan for retirement if they wish to do so.

Faith-Based Saudi Censorship, A Lesson for America
The Jihadist War Behind the Kidnapping of Nigerian Schoolgirls—and the Westerners Behind It
Return to Top