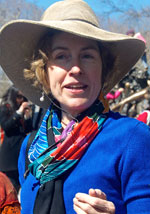 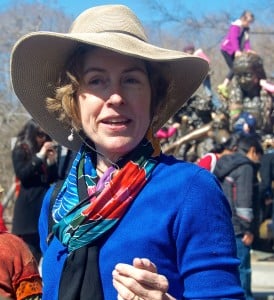 Dianne Durante, a freelance art writer who produces the web site Forgotten Delights, has released an Android app based on her book Outdoor Monuments of Manhattan. The app, produced by Guides Who Know, features more than three hours of video on the fifty-four sculptures that appear in the book, including Continents by Daniel Chester French, Sherman Monument by Augustus Saint-Gaudens, and the Statue of Liberty. I recently spoke with Durante about her new app. —Joseph Kellard

Joseph Kellard: What inspired you to create an app based on your book Outdoor Monuments of Manhattan?

Dianne Durante: Adam Reed, a professor of Information Systems at Cal State LA, wanted to start a company to create top-notch mobile video guides for major cities worldwide. He asked if I could suggest a New York topic for Guides Who Know. My book seemed like a perfect fit.

JK: What are some of the app’s basic features, and how do you envision people using it?

DD: Monuments of Manhattan is a video and graphics guide for phones and tablets. In a series of four-minute episodes, we introduce fifty-four of the most beautiful and intriguing sculptures that stand outdoors in Manhattan. The visuals include many views of each sculpture, plus maps, animations, and archival images. For example, the app includes the sculpture of George Washington at Union Square, which represents him on Evacuation Day, when the British left New York at the end of the Revolutionary War. Among the images in the app are a painting of Washington riding down Broadway, a map of where he rode, and a lithograph of an American sailor pulling down the Union Jack as the British sail out of the harbor.

Music composed just for this app sets the mood. GPS tells which sculptures are nearby. HopStop tells how to reach them. We conceived the app for tourists visiting the sculptures, but it’s self-contained: You can be entertained and inspired by these artworks anywhere, anytime.

JK: Why do you focus specifically on outdoor artworks?

DD: I fell in love with them years ago, when my husband and I decided it would be fun to explore the representational sculptures in New York’s Financial District. It soon occurred to me that self-publishing a book on such works would be affordable. They’re no longer under copyright, and if I took photos myself and printed them in black and white, the expenses wouldn’t be nearly as high as for an art book in glossy color. That led me to create the Forgotten Delights website. I self-published Forgotten Delights: The Producers in 2003. That led to a contract with New York University Press for Outdoor Monuments of Manhattan.

JK: Beyond the obvious, what are the significant differences between outdoor and indoor works in terms of viewing?

DD: In a museum, the lighting and the space around the sculpture are controlled, and usually there’s a label telling you the standard interpretation of the work. Guards will give you the evil eye if you get too close or talk too loudly, and chances are you’ll be part of a crowd. 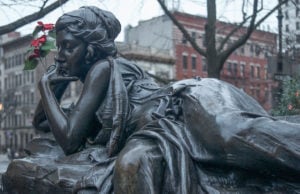 I called my website “Forgotten Delights” because people tend to rush past outdoor sculptures. So visiting one is often like a private viewing. You can chat or argue about the sculpture with a friend. Also, the appearance of the sculpture will change with the weather and the season. The Straus Memorial in summer sunshine looks quite different from the Straus Memorial on a rainy autumn afternoon.

JK: You indicate that the app will help people better understand not only the monuments in question, but art generally. How so?

DD: What got me interested in writing on esthetics—the theory of art—was the desire to understand my own emotional reactions to particular pieces. Usually I’m reacting to the message or theme of a work of art. To figure out what the theme is, I’ve taught myself to carefully consider the choices the artist made. What’s the effect of a painter choosing a particular color? A singer holding a particular note? A sculptor including certain objects or using a certain pose? Once I’ve figured out the message, I can circle back to why I love or hate a particular work. That approach is what I present in Outdoor Monuments of Manhattan, and in the app version of it.

JK: How was the app developed? What were the roles of your collaborators, Richard Gleaves and Adam Reed?

DD: I condensed and adapted the essays from Outdoor Monuments. In a few cases I wrote new versions, when the original text was too abstract to be illustrated. (The episode where I talked about Ayn Rand’s definition of art as “a selective re-creation of reality according to an artist’s metaphysical value-judgments” comes to mind.) I also did the image research, which I very much enjoyed—the video guide is entirely images, no talking heads. And I spent many, many hours at a recording studio.

Richard Gleaves brought my work to life. He put the audio and video together. When I couldn’t supply images, he did amazing (sometimes hilarious) animations. I’d never have thought the Teutonic Knights marching into Lithuania would make me chortle. It was Richard’s idea to compose original orchestral music for each episode, to help set the mood.

Adam Reed turned all this beauty into something others can see and enjoy on their phones or tablet. He owns Guides Who Know and is also the tech guy. He’s done amazing things not only with what you see (the GPS function, the interface, etc.), but with what you don’t see (the speed of the download, the compatibility with multiple video players).

JK: What other projects are you working on now or do you expect to work on in coming months?

DD: Adam is working on iPhone and desktop versions of the app. I’m in the midst of writing a second app, on Central Park. The 60-odd episodes will include sculptures (of course!), Belvedere Castle, the Reservoirs, the Blockhouse, and more. There are an amazing number of great stories there, and I enjoy incorporating details about them. Part of what I love about history has always been integrating a variety of events.

JK: Thank you for your time—I wish you great success with the app.

DD: Thanks for letting me talk! In the development stage, this was the “Secret Project” that I couldn’t talk about, and I’m delighted finally to be able to share my excitement about it.