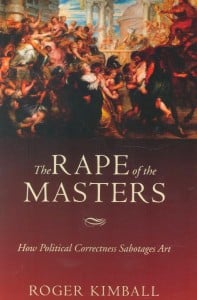 Roger Kimball begins The Rape of the Masters: How Political Correctness Sabotages Art by asking why we teach and study art history. “It is a question,” he says, “that elicits a complicated answer.”

Those are some of the answers, or some parts of the answer, most of us would give. There are others. We teach and study art history—as we teach and study literary history or political history or the history of science—partly to familiarize ourselves with humanity’s adventure in time. We expect an educated person in the West to remember what happened in 1066, to know the plot of Hamlet, to understand (sort of) the law of gravity, to recognize Mona Lisa, Botticelli’s Birth of Venus, or Manet’s Bar at the Folies-Bergère. These are aspects of a huge common inheritance, episodes that alternately bask in and cast illuminations and shadows, the interlocking illuminations and shadows that delineate mankind’s conjuring with the world.

All this might be described as the dough, the ambient body of culture. The yeast is supplied by direct acquaintance with the subject of study: the poem or novel or play, the mental itinerary a Galileo or Newton traveled, the actual work of art on the wall. In the case of art history, the raison d’être—the ultimate motive—is supplied by a direct visual encounter with great works of art. Everything else is prolegomenon or afterthought: scaffolding to support the main event, which is not so much learning about art as it is experiencing art first hand.

Or so one would have thought. What has happened to the main event? (pp. 1–2)

As Kimball makes clear, the main event has changed.

[T]he dominant trend—the drift that receives the limelight, the prizes, the honors, the academic adulation—is decidedly elsewhere. Yes, there are dissenting voices. But the study of art history today is more and more about displacing art, subordinating it to “theory,” to politics, to the critic’s autobiography, to just about anything that allows one to dispense with the burden of experiencing art natively, on its own terms. (p. 3)

According to Kimball, this attack on art unfolds in two ways.

The first involves a process of spurious aggrandizement. You hail the mediocre as a work of genius, for example, or pretend that what is merely repellant actually en-nobles our understanding of art or life. (p. 7)

The second . . . proceeds in the opposite direction. It operates not by inflating the trivial, the mediocre, the perverse, but by attacking, diluting, or otherwise subverting greatness. Its enemy is civilization and the social, moral, and aesthetic assumptions upon which civilization rests. Its aim is to transform art into an ally in the campaign of decivilization. (p. 8)

Examples of both methods of attacking art unfortunately abound. In The Rape of the Masters, Kimball focuses on instances of critics engaging in the latter method of attack with respect to seven artworks: The Quarry by Gustav Courbet, Untitled by Mark Rothko, The Daughters of Edward Darly Boit by John Singer Sargent, Drunken Silenus by Peter Paul Rubens, The Gulf Stream by Winslow Homer, Spirit of the Dead Watching by Paul Gauguin, and A Pair of Shoes by Vincent van Gogh.

For each of these Kimball gives a short bio of the artist, a description of what the artist depicted, a picture of the painting, and a quotation or two by the artist himself if he said anything about it. These provide readers with some degree of an objective basis for evaluating what both leading art critics and Kimball say about each piece. For example, here is what one critic, Professor Anna Chave, says about the paintings of Mark Rothko:

Those images of Rothko’s that parallel the pictorial structure of a pietà, such as White Band (Number 27) (1954), and Number 20 (1950) might be said at the same time to parallel the structure of a conventional mother and child image. Further, and by the same logic, such tripartite pictures as an untitled yellow and black painting of 1953, which bear a relation to the pictorial structure of an entombment, also bear a relation to certain conventional adoration or nativity images. (p. 66)

Kimball’s response is typical of his polemical tone throughout the book. He begins, for example, by observing that anything “might be said.”

White Band (Number 27) is a blue rectangle, eighty-one by eighty-six inches; in the center of the rectangle there floats a narrow gray-white band; above it sits a wider blue-gray band, below a band of charcoal-gray. You might say that it parallels “the pictorial structure of a pietà,” but then you might say that it reminds you of the state of Colorado, Nelson’s semaphored message at the Battle of Trafalgar, or Euclid’s proof of the Pythagorean Theorem. As for that untitled painting from 1953, take a look at the illustration . . . Professor Chave says that it “bear[s] a relation” to the “pictorial structure of an entombment” and “certain conventional adoration or nativity images.” Does it? Does it?

What I see when I look at the picture is a tall, relatively narrow rectangle. The ground of the painting is a sort of brownish white. The top two-thirds of the canvas are nearly filled by a yellow rectangle. Underneath that are flecks of white and then an uneven fairly narrow orange stripe. Underneath the orange is a thick block of black extending to the painting’s edges, followed at the bottom by a bar of mottled orange with a yellowish center. There’s nothing that “bears a relation to,” “parallels,” is a “trace” or “icon” or “palimpsest” of a pietà, an entombment, a nativity scene, or even your Aunt Joan. Nor is there any “message” that needs to be “decoded.” Rothko’s picture is just that: a picture. It is not a “text” to be read or a puzzle that needs to be deciphered or unraveled. It is a painting to be looked at. It is not, in my view, one of Rothko’s strongest works. But even if it were his very best, the little dramas that critics like Anna Chave have invented to “explain” or enhance Rothko’s paintings would be absurd fabrications. (pp. 66–67)

Although I challenge the implication that Rothko’s paintings are works of art, much less masterpieces (more on this below), Kimball’s point about the absurdity of critics inventing little dramas to explain or bolster artworks is both valid and well concretized in The Rape of the Masters. According to Kimball, such fabrications are the rule, not the exception among critics, and he unpacks several cases, showing just how absurd they can be.

Given the shenanigans of the critics being critiqued, The Rape of the Masters is, at times, painful to read. Given Kimball’s cutting commentary, however, even the painful parts are oddly pleasing. Consider Kimball’s analysis and mockery of a criticism by Professor David M. Lubin of John Singer Sargent’s The Daughters of Edward Darly Boit:

Lubin’s first point is that the French word for box, boîte, is only one letter and an accent mark away from the surname of the painting’s subject: “Boit.” “The Boit Children makes a visual-verbal pun by translating into Les Enfants de (la) Boît(e): the children of Boit and the children of the box.” In fact, it is not the painting that makes the pun—and a silly enough pun it is—but Professor Lubin. And that’s just the beginning of his charade. “Another way of accounting for the overall emptiness or lack that the painting bespeaks,” Professor Lubin intones, “is that the Female Child enclosed within this geometric and ideological box is also trapped within a biologic box: the lack of the father’s E, his penis.”

Bring you up short, did it? Perhaps you’re thinking that the real issue here is not the totally fortuitous and irrelevant similarity between the surname “Boit” and the French word for “box” but the much more pertinent congruence between “Boit” and the third person singular of the French word boire, to drink: il boit, he drinks, he is a drunkard, sot, lush, tippler.

You feel that Professor Lubin knows he’s straining here, for he hastily issues one of his periodic disclaimers: “Why in the world,” he asks, “have I equated the Boit’s father’s first initial, the letter E, with the male organ?” An excellent question, that. We don’t get a satisfactory answer but rather a flurry of persiflage about how “it is less ironic than predictable that in French, boîte is a feminine gender noun.” It is also less ironical than predictable that a present-day academic would assimilate the grammatical concept of gender to the biological category of sex. What we call “gender” in grammar often has but a tenuous relation with sexual identity. Thus, for example, the German word for young girl is das Mädchen, a neuter noun. Professor Lubin says, “Sargent’s portrait not only uses the devices of realist representation to depict Boit’s girls as feminine, but also doubles the depiction by enclosing them within a superstructure for which the French term is feminine.” Er, not quite, professor. Sargent represented Edward Boit’s daughters “as feminine” because—how can I put this?—the people he was painting were little girls. I know that is a difficult thing to get one’s mind around, but with patience Professor Lubin will discover that little girls are often, indeed regularly, “represented as feminine.” With a little practice, he may even discover why this is so. (pp. 104–5)

The Rape the Masters is laden with such caustic acts of justice.

Unfortunately, Kimball’s selection of artists and some of his commentaries about their works are themselves baffling. For example, that Kimball includes Mark Rothko as a “master” painter and says his paintings “offer unadulterated aesthetic pleasure” (p. 68) simply makes no sense. Kimball also names Paul Gauguin as a “master,” adding that “genius” is at work in his paintings (p. 151). In both cases, as well as others, I wanted to ask the critic—this time Kimball—whether we were looking at the same thing and, if so, whether such comments weren’t themselves examples of what he earlier called “spurious aggrandizement” or glorifying mediocrity or worse at the expense of those who were truly great.

Such puzzlement aside, The Rape of the Masters substantially succeeds at what it set out to do—that is, “to object to the objectionable” in the art world—and I recommend it to anyone who enjoys viewing and analyzing paintings.

Daniel Wahl is assistant editor at The Objective Standard.
View all posts by Daniel Wahl →
The Dictionary of Human Form, by Ted Seth Jacobs
The Martian, by Andy Weir
Return to Top