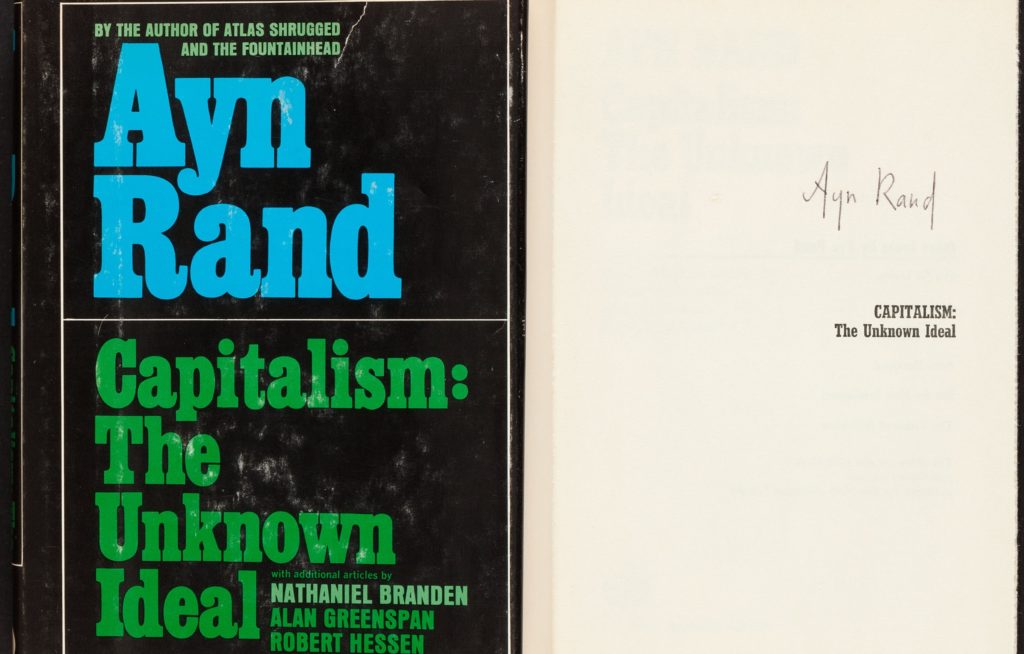 That Salon has again published an attack on Ayn Rand is no surprise; many on the left are obsessed with attacking Rand—a trend that indicates the growing cultural influence of her ideas. At least the latest such attack, written by C. J. Werleman, is not nearly as nasty as are previous Salon articles; however, Werleman still misrepresents Rand’s ideas and thus attacks a straw man.

In his article—“The Atheist Libertarian Lie: Ayn Rand, Income Inequality and the Fantasy of the ‘Free Market’”—Werleman fundamentally misunderstands the nature of capitalism, and he completely fails to grasp the facts Rand and others cited supporting the idea that capitalism is the only moral system.

The following excerpts convey some of his main claims regarding capitalism:

Robert Reich says that one of the most deceptive ideas embraced by the Ayn Rand-inspired libertarian movement is that the free market is natural, and exists outside and beyond government. In other words, the “free market” is a constructed supernatural myth. . . .

Reich says rules that define the playing field of today’s capitalism don’t exist in nature; they are human creations. Governments don’t “intrude” on free markets; governments organize and maintain them. Markets aren’t “free” of rules; the rules define them. . . .

Atheists are skeptics, but atheist libertarians evidently check their skepticism at the door when it comes to corporate power and the self-regulatory willingness of corporations to act in the interests of the common good. . . . Corporations pollute, lie, steal, oppress, manipulate and deceive, all in the name of maximizing profit. . . .

In effect, America virtually exists as a libertarian state, certainly when compared to liberal democracies found in Western Europe, Canada and Australia.

Let us unravel Werleman’s major errors, beginning with his claims about Rand’s views. (Werleman commits so many errors and logical fallacies in his article that I cannot address them all in the scope of this blog post; for example, I won’t address his claims about income inequality, a topic I’ve discussed elsewhere.)

By referring to “the Ayn Rand-inspired libertarian movement,” Werleman suggests that the views he describes in the article are those of Rand. But readers of his article will notice that he does not quote Rand to the effect that she thinks “the free market is natural, and exists outside and beyond government”—because she never claimed any such thing. For Werleman to make up stuff about Rand and ignore her stated views, especially when she has written so much about capitalism that is so easy to find (see, e.g., her book Capitalism: The Unknown Ideal), reflects intellectual laziness on his part. So, what did Rand actually write on the matter?

For an indication, in “The Nature of Government” (reprinted in The Virtue of Selfishness), Rand points out that a rights-respecting government is integral to capitalism:

If men are to live together in a peaceful, productive, rational society and deal with one another to mutual benefit, they must accept the basic social principle without which no moral or civilized society is possible: the principle of individual rights. . . .

Man’s rights can be violated only by the use of physical force. . . . If physical force is to be barred from social relationships, men need an institution charged with the task of protecting their rights under an objective code of rules.

This is the task of government—of a proper government—its basic task, [its] only moral justification and the reason why men do need a government.

Because Werleman ignores the fact that a free market (i.e., capitalism) is governed by rights-respecting laws, he pretends that a free market permits such rights violations as property-harming pollution, theft, and fraud. In fact, capitalism is the social system (and the only social system) in which government scrupulously protects people’s rights by enforcing contracts, protecting property rights, outlawing theft and fraud, and refraining from violating people’s rights itself. (Obviously, a rights-respecting government does not force any person or group of people to act against their judgment for the alleged “common good,” as apparently Werleman advocates.)

Next, Werleman suggests, presumably with a straight face, that the United States currently is, in essence (he uses the term “virtually”), a free market. And he thinks Ayn Rand is living in a fantasy? As just a few indicators of why Werleman is spectacularly wrong on this count, consider that aggregate government spending approaches 40 percent of GDP; that Americans pay more in taxes than they do for housing, food, and clothing combined; that entitlement and welfare spending at the federal level alone is around $2 trillion annually; that government pays some “46% of the nation’s total health care tab”; that the United States has the “highest corporate tax rate in the developed world”; and that the 2013 Federal Register contains over more than eighty thousand pages of regulations. Although significant aspects of American life remain free, the United States is far from being a truly free market.

Werleman’s broadest point is that genuine free markets don’t even exist because they’re not “natural” things—by which he means physical things. But, by the same standard, all other abstractions—justice or ridicule or extravagance or hypotheses—don’t “exist” either.

Moral and political principles are not “natural” entities, in the sense that a cat or a mountain is a natural entity. But proper principles are derived from and based on facts: specifically, in these areas, on the factual requirements of man’s life and happiness. (For details, see Rand’s works or Craig Biddle’s “Ayn Rand’s Theory of Rights: The Moral Foundation of a Free Society.”) As Rand repeatedly emphasized—and Werleman systematically ignores—the principles of capitalism have never been fully implemented, and that’s the problem. As Rand writes in “The Objectivist Ethics” (in The Virtue of Selfishness):

When I say “capitalism,” I mean full, pure, uncontrolled, unregulated laissez-faire capitalism—with a separation of state and economics, in the same way and for the same reasons as the separation of state and church. A pure system of capitalism has never yet existed, not even in America; various degrees of government control had been undercutting and distorting it from the start. Capitalism is not the system of the past; it is the system of the future—if mankind is to have a future.

Fast-Food Workers Seek Government Guns to Back Demands
Unlike Ezekiel Emanuel, I Hope Not to Die at 75
Return to Top

One Response to Contra Salon, Capitalism, as Ayn Rand Said, Has Never Existed—But Should