Steve Simpson’s excellent new anthology, Defending Free Speech, opens with a 1989 essay by Leonard Peikoff titled “Religious Terrorism vs. Free Speech.” Commenting on the Iranian persecution of Salman Rushdie (author of The Satanic Verses)—and the failure of the U.S. government to protect Rushdie and his publishers against violent reprisals—Peikoff wrote:

Civilization depends on reason; freedom means the freedom to think, then act accordingly; the rights of free speech and a free press implement the sovereignty of reason over brute force. If civilized existence is to be possible, the right of the individual to exercise his rational faculty must be inviolable.

Peikoff went on to point out that politicians and pundits on both the religious right and the relativist left were too timid to take action or even speak out against these atrocities. The reason? Both had abandoned the fundamental principles needed to defend free speech. The religious right was hamstrung by religion: How could they defend Rushdie’s blasphemy if they were willing to ban Darwin from classrooms? The left offered a tepid defense, but they were constrained by cultural relativism and collectivism, which they had learned from their university professors. “The clear and present danger,” Peikoff continued,

is that writers and publishers will begin, as a desperate measure of self-defense, to practice self-censorship—to speak, write, and publish with the implicit thought in mind: “What group will this offend and to what acts of aggression will I then be vulnerable?” (5) 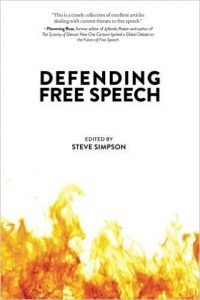 Fast-forward nearly three decades to an Objectivist conference the Ayn Rand Institute hosted in 2016. During the Q&A following a presentation, an earnest college student publicly thanked the speakers for providing a “safe place” to speak out in favor of capitalism. Such a place, he said, did not exist on his university campus.

Older members of the audience—this writer included—were dumbstruck. Did this young person really have to travel hundreds of miles to a private conference just to speak his mind? Further, if students cannot feel “safe” defending a controversial point of view on their own campus, is it because they have been nudged into “self-censorship”?

In the years since Peikoff sounded his warning, attacks on free speech have become more blatant, including attempts by government itself to suppress speech. For example, prior to the 2012 election, the IRS attempted to restrict the political speech of Tea Party groups by denying them tax-exempt status. And recently, in a naked attempt at intimidation, the attorney general of Massachusetts issued a subpoena of ExxonMobil’s email correspondence, including the company’s correspondence with Alex Epstein, author of The Moral Case For Fossil Fuels and an outspoken critic of government energy policy.

Such violations of free expression are met with little public opposition today. Once upon a time, Americans could count on intellectuals, journalists, and politicians to stand up for free speech. Intellectuals and journalists, in particular, were educated in and inspired by our universities, which proudly advocated and upheld freedom of speech and formed the front line of defense against violations thereof. But today’s intellectuals and pundits are ominously muted; and, in a painful twist, free speech is now under attack in the very academic institutions that once cherished and protected it. Some of our universities have even implemented controls on “offensive” language, have attempted to define speech as violence (“micro-aggressions”) and have demanded “safe spaces” where “offensive” speech is prohibited.

It’s high time to renew and reinvigorate the argument in favor of unconditional free speech. Defending Free Speech takes an important step in that direction.

Editor and contributor Steve Simpson is uniquely qualified for the battle. A veteran lawyer and litigator, he not only writes about free speech, he has defended it publicly in court and in the media for more than fifteen years—first as senior attorney at the Institute for Justice (IJ), where he litigated constitutional cases in courts across the nation—and now as the director of legal studies at the Ayn Rand Institute, where he writes and speaks on a variety of legal and philosophical issues. As a practicing lawyer, Simpson was involved in several important free speech cases. For example, he was the lead litigator in SpeechNow v. Federal Election Commission, the case that created Super PACs, and cocounsel in Arizona Freedom Club PAC v. Bennet, IJ’s successful U.S. Supreme Court challenge to an Arizona law that used tax revenues to fund political campaigns. In addition to litigating, Simpson has testified before Congress, appeared on television and radio programs such as Stossel and PBS Newshour, and written articles appearing in, among others, The Wall Street Journal, The Washington Post, and Slate.

Simpson arranges his collection of essays and interviews into three sections. Part 1, “The War on Free Speech,” supplies raw historical evidence of the increasing number of attacks on speech, highlighting the intimidation of journalists and entertainers by Islamic terrorists. At the end of part 1, Simpson supplies a summary time line of the major anti-free speech incidents since the Rushdie affair, leaving no doubt that the war on speech is accelerating. Unsettling as this may be, Simpson finds reason for hope: Despite our intellectuals’ near abandonment of the issue, he writes, free speech is still popular among the general citizenry. Thus there is a base on which to rebuild its defense.

Part 2, “Free Speech Fundamentals,” lays out the intellectual and legal basis for safeguarding free expression. In a series of essays by Simpson and Onkar Ghate (Senior Fellow at the Ayn Rand Institute), the authors argue that any attack on free speech is an attack on reason itself. Of particular value in this section is Ghate’s interview with the student newspaper The Undercurrent, in which he convincingly summarizes the crucial need for free speech in a civilized society.

Part 3, “Free Speech vs. ‘The Public Interest,’” explores an important current legal issue: so-called campaign finance reform, which attempts to limit financial contributions to political candidates in the name of protecting “the public interest.” Simpson, an expert on the issue, documents the “creeping censorship” surrounding campaign finance law. Although he and others have successfully argued several important cases, he concludes that the outcome so far is mixed: On the one hand, the Supreme Court has issued some good judgments that treat speech, properly, as an individual right rather than as a matter of “public interest”; on the other hand, some legislators persist in trying to muzzle political speech, most recently by proposing a Constitutional amendment that would limit campaign contributions. “Amending the Constitution,” writes Simpson, “is a long shot, and today’s effort will almost definitely fail. But tomorrow’s may not.”

For intellectual activists intent on creating a rational culture, there is no political value higher than freedom of speech. Several decades ago, in a speech to a group of journalists, Ayn Rand put it this way:

Once a country accepts censorship of the press and of speech, then nothing can be won without violence. Therefore, so long as you have free speech, protect it. This is the life-and-death issue in this country: do not give up the freedom of the press—of newspapers, books, magazines, television, radios, movies, and every other form of presenting ideas. So long as that’s free, a peaceful intellectual turn is possible.1

The bottom line is that freedom of speech is a cornerstone of peaceful, civilized society. And, as Simpson concludes in his excellent book on the subject, “If you value free speech, now would be a good time to start making yourself heard” (96).

Jim Brown holds an MBA from Harvard Business School and is the CEO of the Ayn Rand Institute in Irvine, CA.
View all posts by Jim Brown →

Norman Rockwell: Behind the Camera, by Ron Schick
The Cave and the Light: Plato Versus Aristotle, and the Struggle for the Soul of Western Civilization, by Arthur Herman

1. Ayn Rand, from a 1961 lecture, “The Political Vacuum of Our Age,” to a group of journalists in Indiana. Quoted in Ayn Rand Answers, edited by Robert Mayhew (New York: New American Library, 2005), 48. This speech is not referenced in Simpson’s book.