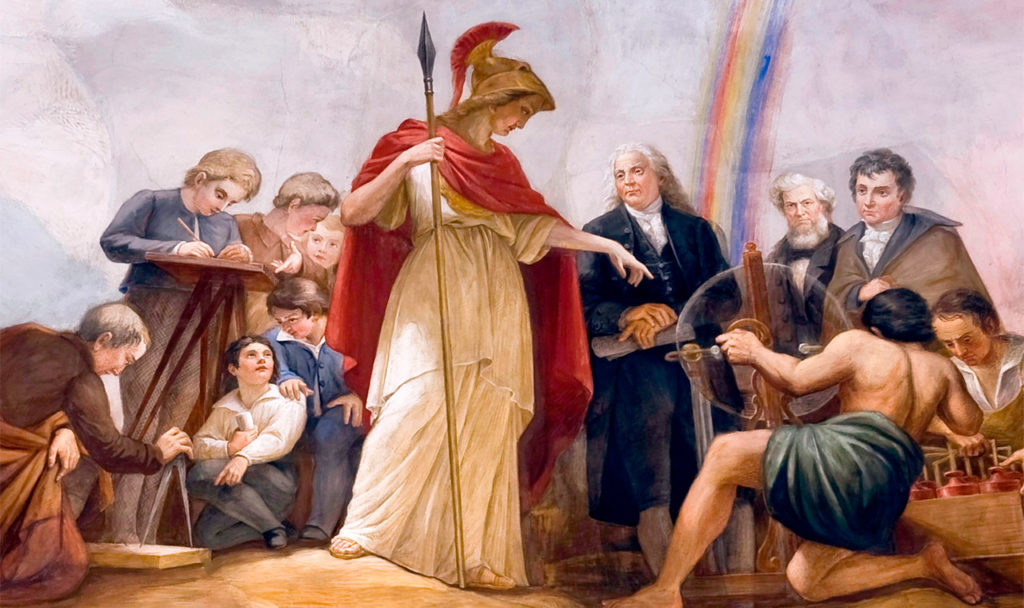 Editor’s note: The following is chapter 4 of Michael Dahlen’s book Ending Big Government: The Essential Case for Capitalism and Freedom (Minneapolis: Mill City Press, 2016). Because this chapter is from a published book, it has not been edited by TOS. Ending Big Government is available in Kindle and paperback formats through Amazon.com.

[Philosophy] . . . determines the destiny of nations and the course of history. It is the source of a nation’s frame of reference and code of values, the root of a people’s character and culture, the fundamental cause shaping men’s choices and decisions in every crucial area of their lives. It is the science which directs men to embrace this world or to seek out some other that is said to transcend it—which directs them to reason or superstition, to the pursuit of happiness or of self-sacrifice, to production or starvation, to freedom or slavery, to life or death. It is the science which made the difference between the East and the West, between the Middle Ages and the Renaissance, between the Founding Fathers of the new continent and the Adolf Hitlers of the old. —Leonard Peikoff

Philosophy, as Peikoff points out, moves human history. What does that mean? History is the aggregate of past human actions. How people, nations, and cultures act follows from what they think and believe, from the fundamental values and ideas they choose to accept. Philosophy determines broad trends, not specific events. Chance crises, accidents, and disasters beyond human control undoubtedly affect history. But how a nation responds to its problems follows from its philosophy. Its politico-economic system also follows from its philosophy.

The core values of Western culture are reason and science, individualism and the pursuit of happiness, freedom and representative government. Although the West has failed to apply these ideas consistently, they nevertheless define it. Why? Because such ideas originated in the West and distinguish it from all other cultures. When the West embraced these ideas, it flourished; when it embraced opposite ideas, it languished.

Chapters 2 and 3 outlined the basic philosophies underlying capitalism and statism. This chapter will show the connection between philosophy and politics in practice. It will survey the history of Western civilization, showing that the politico-economic system of a given era followed from the dominant philosophy of that era.

Primitive Man and the First Civilizations of the Ancient Near East

Man’s first approach to understanding the world was unavoidably pre-rational. He had no concept of an inanimate world governed by natural, immutable, impersonal laws. He believed everything—rocks, trees, rivers, mountains—was enchanted or animated with spirits. As historians Henri and H. A. Frankfort point out, when primitive man tried to identify the cause of something, he looked not for the how, but for the who:

He does not expect to find an impersonal law regulating a process. He looks for a purposeful will committing an act. If the rivers [don’t] . . . rise, it is not suggested that the lack of rainfall on distant mountains adequately explains the calamity. When the river does not rise, it has refused to rise. The river, or the gods, must be angry with the people who depend on the inundation.1

To understand the gods and to understand his place in the world, primitive man invented mythical stories based not on reason and logic, but on emotion and imagination. He also looked to priests, shamans, and witch doctors—those who claimed to communicate with the gods by means of chants, rituals, and incantations—to answer his questions. Primitive man served, obeyed, and worshipped the gods to curry their favor and to gain their protection. One way of serving the gods was to sacrifice humans and animals.

Given his primitive development, man had not yet discovered rational ethical and political principles to guide his social interactions. In dealing with others, he frequently resorted to physical force. A leading cause of death was murder,2 and the best-developed skill was war.3 Archeological evidence shows that ancient warfare was twenty times more lethal (adjusted for population) than the wars of the twentieth century.4

Primitive man was organized not in states or nations, but in bands, tribes, and chiefdoms. These tribal societies sought to protect their members from the brutality of outsiders, but individuals were not protected from their leader, the tribal chief. Recognizing no rights of the tribe’s members, the tribal chief held life-and-death power over them. They were his subjects, and his right to sacrifice them was unquestioned. The tribal chief’s authority to rule, moreover, was based on his divine descent.5

Primitive man led a subsistence-level existence. Because the tribal chief ruled man’s body and because the witch doctor ruled man’s mind, there was no room for the creator and the producer, the scientist and the innovator—those who created wealth and discovered new knowledge.6

Fortunately, some thinking individuals, whose identities are unknown, carried mankind forward. Ten thousand years ago they discovered agriculture. Five thousand years ago they built the first civilizations, Egypt and Mesopotamia, in the ancient Near East. These civilizations developed cities, built monumental architecture, and created sophisticated art. They invented the wheel and the sailboat, facilitating long-distance trade. They also made rudimentary advances in mathematics and astronomy. The Sumerians, creators of Mesopotamian civilization, invented a form of writing with pictograms on clay tablets, cuneiform, used mostly for record keeping. The Egyptians developed a similar form of writing, hieroglyphs. Later, the Phoenicians invented the first alphabet. Law codes were also developed, the best known of which was the code of Hammurabi, ruler of the old Babylonian empire. . . .

Michael Dahlen is the author of Ending Big Government: The Essential Case for Capitalism and Freedom. He holds a Master of Science in finance and economics from Walsh College and a Bachelor of Science from Penn State University. His articles have appeared in Skeptic, Liberty, and American Thinker. He is a managed accounts administrator for SEI Investments.
View all posts by Michael Dahlen →
Liberal Education and the Quest for Truth, Freedom, and Greatness
The Greeks and America’s Founding Fathers Part 1: The Greek Frame
Return to Top