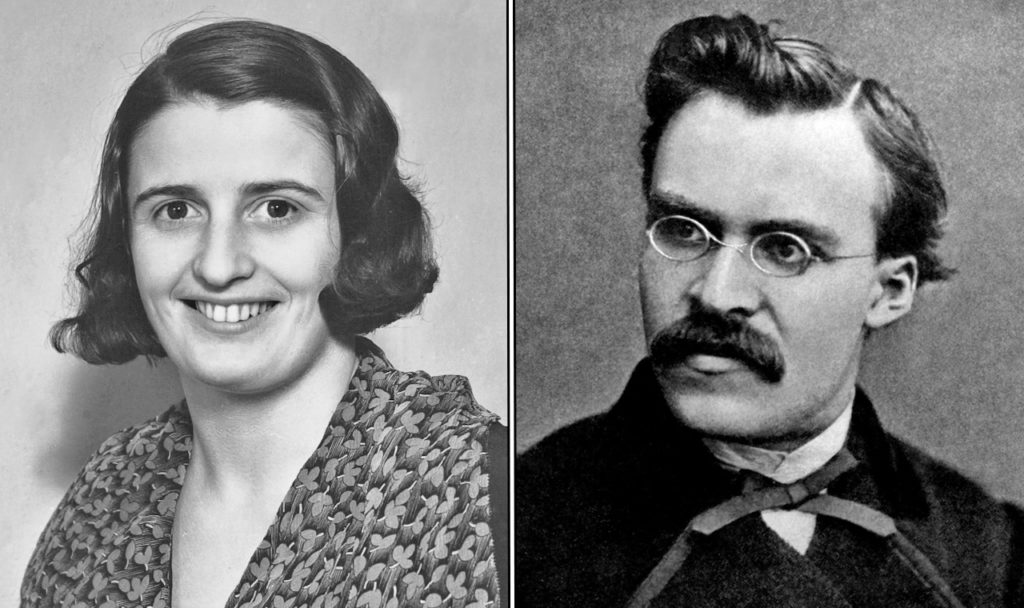 Editor’s note: This article is an edited version by Michael Berliner of Dr. Ridpath’s article originally written for a 2005 project that was canceled. Because the article was written prior to the publication of A Companion to Ayn Rand, Allan Gotthelf and Greg Salmieri, eds. (New York: Wiley-Blackwell, 2016), it makes no reference to that book’s chapter on Nietzsche by Lester Hunt.

I disagree with [Nietzsche] emphatically on all fundamentals. —Ayn Rand (1962)1

I do not want to be confused with Nietzsche in any respect. —Ayn Rand (1964)2

Why was Ayn Rand determined to distance herself from Nietzsche? Because in her time, as today, various writers portrayed her as a Nietzschean, claiming that she embraced his ideas and modeled her characters accordingly—which she did not.

The notion of Rand as a Nietzschean was promulgated most viciously in Whittaker Chambers’s 1957 review of Atlas Shrugged, published in National Review. Although he acknowledged Rand’s debt to Aristotle, Chambers wrote that she is “indebted, and much more heavily, to Nietzsche” and that “her operatic businessmen are, in fact, Nietzschean supermen.”3 Since then, similar claims have been made in countless articles and books, including Goddess of the Market, in which Jennifer Burns declared that Rand’s “entire career might be considered a ‘Nietzschean phase.’”4

Was Rand influenced by Nietzsche? To some extent, yes. In the 1930s, she called him her “favorite philosopher” and referred to Thus Spake Zarathustra as her “bible.” As late as 1942, Nietzsche quotes adorned the first pages of each section of her manuscript of The Fountainhead. But from her first encounter with his ideas, Rand knew that her ideas were fundamentally different from his.

Rand first read Nietzsche in 1920, at the age of fifteen, when a cousin told her that Nietzsche had beaten her to her ideas. “Naturally,” Rand recalled in a 1961 interview, “I was very curious to read him. And I started with Zarathustra, and my feelings were quite mixed. I very quickly saw that he hadn’t beat me to [my ideas], and that it wasn’t exactly my ideas; that it was not what I wanted to say, but I certainly was enthusiastic about the individualist part of it. I had not expected that there existed anybody who would go that far in praising the individual.”5

However attracted to Nietzsche’s seeming praise of the individual, Rand had her doubts even then about his philosophy. As she learned more about philosophy and about Nietzsche’s ideas, she became increasingly disillusioned. “I think I read all his works; I did not read the smaller letters or epigrams, but everything that was translated in Russian. And that’s when the disappointment started, more and more.”6 The final break came in late 1942, when she removed her favorite Nietzsche quote (“The noble soul has reverence for itself”)7 from the title page of The Fountainhead. By this time, she had concluded that political and ethical ideas—including individualism—are not fundamental but rest on ideas in metaphysics and epistemology. And this is where the differences between her philosophy and that of Nietzsche most fundamentally lie.

The roots of both Nietzsche’s and Rand’s philosophies can be traced to their youths. . . .

John Ridpath is former Associate Professor of economics and intellectual history at York University, Toronto. His research interests included the ideas influencing the Founding Fathers and early American history, and the philosophy and influence of Friedrich Nietzsche. For many years, Dr. Ridpath served on the board of directors of the Ayn Rand Institute.
View all posts by John Ridpath →

America at Her Best Is Hamiltonian
The Greeks and America’s Founding Fathers, Part 3: The Two Freedoms

11. Friedrich Nietzsche, Philosophy during the Tragic Age of the Greeks, quoted in F. A. Lea, The Tragic Philosopher (London: Methuen: 1957), 46.

14. Nietzsche, Tragic Age of the Greeks, quoted in Lea, The Tragic Philosopher, 46.

17. Nietzsche, Beyond Good and Evil, quoted in Morgan, What Nietzsche Means, 61.

20. Nietzsche, Will to Power, quoted in Morgan, What Nietzsche Means, 118.

21. Nietzsche, Will to Power, quoted in Morgan, What Nietzsche Means, 63.

30. Nietzsche, Will to Power, quoted in Morgan, What Nietzsche Means, 50.