Many people, from all sectors of the political spectrum, believe our government is bought and paid for by corporations. Fat-cat businessmen, in this view, bribe politicians. They donate cash to politicians’ campaigns, and in return politicians grant them special favors: bailouts, subsidies, protection from competition, and the like. Money, according to this line of thinking, corrupts politics.

This view contains an element of truth. Some businessmen do seek special favors from government. But that is only a small part of the story. In Extortion: How Politicians Extract Your Money, Buy Votes, and Line Their Own Pockets, Peter Schweizer points out, “We have focused on the buyers of influence (those outside special interests), but paid little heed to the sellers of influence—bureaucrats and politicians” (2). “What if the problem,” Schweizer asks, “is not bribery . . . but extortion” (2)?

If so, the idea that money corrupts politics is backward. Rather, Schweizer argues, “Politics is corrupting money” (1–2). The politicians and bureaucrats, not the corporations, are pulling the strings. 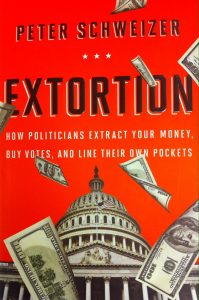 When corporations donate money to politicians’ campaigns, often they are not looking for special favors. They donate because the politicians request it. Why can’t the corporations decline? The short answer is: They fear what the politicians will do to them if they refuse to donate. Schweizer quotes former senator Russ Feingold (D-WI): “It’s not like businesses and business leaders call up politicians and beg them, could I please give you some money? It goes the other way, which is that people are called constantly by politicians when you have a system like this . . . And it’s more like extortion than it’s like bribery” (4).

Politicians extort corporations in many ways. Schweizer points out, for example, that only about 5 percent of the bills introduced in Congress become law. Many of these bills, though, are not intended to become law. What, then, is the purpose of such bills? “Politicians from some parts of the country,” Schweizer writes, “refer to ‘milker bills,’ which are intended to ‘milk’ companies and individuals to . . . stop legislation that will . . . hurt them. Others call them ‘juicer bills’ because they are introduced largely for the purpose of squeezing money out of the target” (13). In short, politicians introduce a bill that they know will harm a particular industry. Then they solicit donations from that industry, the implicit message being: If you pay up, we won’t pass the bill.

“Whatever you call them,” Schweizer continues, “these bills are designed not to make good laws, but rather to raise money. The politicians are not necessarily interested in having the bill pass. . . . Indeed, politicians often don’t want these bills to pass because if they do, the opportunity for future extortion is removed” (13).

Some of these “milker bills” are designed to benefit an industry rather than harm it. In this case, politicians solicit donations to pass the bill or just to schedule it for a vote on the House floor. Many of these bills, however, “are purposely designed to expire every few years so politicians can then revisit the issue and ‘juice’ the same people” (13). A good example of this are “tax extenders.” These are tax breaks that the government has never made permanent, such as the research and development (R&D) tax credit. As of 2011, according to Schweizer, there were 154 tax extenders. They “are essentially the Washington, D.C., version of the ‘mob tax’: paying members of Congress to do something that they are supposed to be doing in the first place. Those who wonder why the American tax code is so complex, convoluted, and constantly changing fail to appreciate what a wonderful tool it is for extortion” (38).

Sometimes a bill is introduced that one industry supports, but another opposes. This allows politicians “to squeeze two cows at the same time, one on each side of an issue” (80). This kind of bill is called—wait for it—a “double-milker.” In 2011, Congress floated two bills of note in this regard: the Stop Online Piracy Act (SOPA) in the House and the Preventing Real Online Threats to Economic Creativity and Theft of Intellectual Property Act (PIPA) in the Senate. Hollywood supported these bills; Silicon Valley opposed them. Together, both sides spent more than $100 million lobbying. SOPA and PIPA, according to Schweizer, “presented the perfect double-milker. . . . Team Obama could extract more money from both industries at a time when fund-raising was proving to be more difficult than expected” (84). In the end, neither bill passed. One side was bound to be double-crossed—and it was Hollywood.

Silicon Valley, on the other hand, learned an important lesson, the same lesson Bill Gates learned in the 1990s from the antitrust lawsuit against Microsoft: Just because you leave Washington alone does not mean it will leave you alone. Like Gates before, most tech companies just want to compete and innovate. They want no special favors, and they want nothing to do with politics. But not anymore. Silicon Valley now dumps boatloads of cash into lobbying in order to keep the government off its back.

Considering that extortion is illegal, how does Washington get away with it? “So long as politicians and bureaucrats,” Schweizer writes, “don’t explicitly demand a quid pro quo, their actions are not illegal. As long as they don’t spell out precisely what they are selling and demanding what they will get in return, they are fine” (18). As the gangster saying goes, “Nice business you got here; be a shame if something happened to it.”

Schweizer focuses mainly on how politicians shake down businessmen for cash. But he also documents other corrupt—yet legal—practices, such as how politicians use campaign funds to buy votes from other members of Congress; how they funnel campaign donations into their own pockets and the pockets of their family members; and how bureaucrats purposely make regulations unintelligible, so when they leave their government posts they can then become private consultants, charging companies a fortune to decipher what the regulations mean.

Extortion is a good exposé of what really goes on in Washington with regard to money, government, and business. Schweizer provides numerous concrete examples, and he names names, both the victims and the perpetrators. His criticisms, moreover, are nonpartisan. He attacks Democrat and Republican politicians equally.

Although Schweizer ably documents the problem, the solutions he offers leave much to be desired. Some reforms he suggests are sensible, such as adopting a single-subject rule for all bills, and requiring politicians to actually read the bills they vote on. But such reforms fail to address the root of the problem: Government simply has too much power. The only principled and definitive solution (though not easy to achieve) is to limit government to protecting individual rights. If politicians were constitutionally barred from enacting rights-violating bills, then they could not use such bills to extort people. “Nice business you got there” would simply be a compliment.

Michael Dahlen is the author of Ending Big Government: The Essential Case for Capitalism and Freedom. He holds a Master of Science in finance and economics from Walsh College and a Bachelor of Science from Penn State University. His articles have appeared in Skeptic, Liberty, and American Thinker. He is a managed accounts administrator for SEI Investments.
View all posts by Michael Dahlen →

The Greeks and America’s Founding Fathers, Part 3: The Two Freedoms
The Spring 2017 Issue of TOS
Return to Top