Many people assume that Central Park, unlike the city of steel and concrete surrounding it, is a stretch of Manhattan that’s been left untouched by developers. In fact, the park is virtually as man-made a development as the neighboring skyscrapers. Sara Cedar Miller highlights this fact in her informative and eye-catching book Seeing Central Park: The Official Guide to the World’s Greatest Urban Park.

The official historian and photographer for Central Park Conservancy (the private organization that operates the park for the city of New York), Miller notes that everything from its lakes, ponds, and streams to boulder-ridden woodlands and expansive meadows is the work of its 19th-century codesigners, Frederick Law Olmsted and Calvert Vaux. For instance, she writes about the park’s Sheep Meadow: “Originally a rocky and swampy terrain, the designers transformed the landscape into a pastoral meadow by blasting the outcrops and adding four feet of soil to the fifteen-acre site” (62).

Published in 2009, Seeing Central Park is an abridged offshoot of Miller’s earlier work with the specific purpose of helping people see and understand the park’s many features. Readers are guided through landscapes and to monuments and bridges via photos, maps, and informational commentaries. Highlights include Augustus Saint-Gaudens’s monument to Civil War hero William Tecumseh Sherman stationed outside the park’s main entrance (33), the elm-lined mall near the middle of the park (72–73), and the well-manicured Conservatory Garden in its northern reaches (156–57). Miller walks readers through Cedar Hill (118–19) and several other picturesque landscapes. Her strategically shot photographs give the strong impression that one is in those settings, enticing viewers to push aside low-hanging branches as they proceed.

Central Park was planned and developed during the years of strife before and during the Civil War while New York continued to grow as a bustling major metropolis. These realities informed the theme of Olmsted and Vaux’s design for the park: a place of appreciation for and quiet contemplation of nature. Their love of nature was influenced by painters of the Hudson River School, whose art depicted the valley’s landscapes. Olmsted, however, wanted their work to improve upon nature. Miller explains, saying:

Olmstead theorized that “[a] mere imitation of nature, however successful, is not art.” And it was most certainly art that he and Vaux aspired to in their design for Central Park. In the natural world it was, he explained, “unlikely that accident should bring together the best possible ideals of each separate [landscape and] still more unlikely that accident should group a number of these possible ideals in such a way that not only one or two but that all should be harmoniously related one to the other.” (14–15) 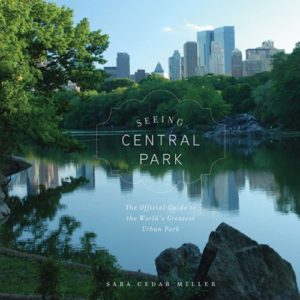 The park incorporated several innovations that inspired other projects. For example, the east-west roads built to accommodate crosstown traffic were depressed below ground level to preserve the park’s pastoral quietude. These influenced the design of America’s highway system a century later. And the park’s dozens of sculptures, though not part of the original design, made it “America’s first sculpture park” (26). Bethesda Terrace and Fountain, with its grand staircases and many intricate stonework carvings, is “the Heart of the Park” (17) and considered a groundbreaking masterpiece. Miller contends it is perhaps the greatest example of 19th-century architecture (82).

Miller’s photos of the park’s art—including The Pilgrim (by John Quincy Adams Ward), which stands alongside spectacular cherry blossoms—are among the many attractive images that make the book so alluring. What is most impressive about her photos, though, are their diverse compositions. She features pictures taken not only from various vantage points, but also at different times of the day, during all four seasons, and in various weather conditions. The photos evoke varying moods and perspectives, giving readers an experience in some ways more dynamic than an actual walk through the park. Autumn-colored trees line The Pond (35); snowdrifts blanket Strawberry Fields (106) and Greywacke Arch (20); and aerial shots provide bird’s-eye views revealing design layouts of areas such as Conservatory Water, giving a perspective readers could never get by visiting the park.

Primarily a guide to the modern-day park, Seeing Central Park is short on photos from decades past. Still, Miller offers a brief historical context in her introduction and peppered throughout her commentaries. Adrian Benepe, a former commissioner of the city’s Department of Parks & Recreation, also writes in the epilogue about the park’s more recent history.

Unfortunately, because the city “owns” Central Park, its bureaucrats have been the final arbiters on park-related decisions. In fact, they used eminent domain laws to take the property of some pre-park homeowners. City commissioners served as the judges who selected the park’s original design in a public competition. Olmsted and Vaux’s design won, but they were compelled to include some features they opposed. For instance, some commissioners who rode horses demanded a riding path that Olmsted and Vaux believed conflicted with their goal to keep the park as serene as possible. The commissioners used their positions to make this and other modifications to the design.

Despite government ownership, many of the park’s features were made possible by private donors. For instance, virtually all of the monuments and sculptures were donated by private individuals and organizations, as were the Delacorte Theater, Wollman Rink, and Arthur Ross Pinetum—a four-acre landscape devoted solely to conifers.

Private donors have played a major role in the park’s evolution in recent decades. When New York City flirted with bankruptcy in the 1970s, public funds for its parks system dried up, and Central Park fell into neglect and disrepair. Fields turned into virtual dust bowls, buildings were defaced with graffiti, and criminal activity surged. There was talk that the federal government might seize control of what was once the city’s jewel.

Instead, Central Park Conservancy was formed in 1980 and eventually contracted with the city to take partial control over the green. By generating private funds and marshalling volunteers, the conservancy has played a major role in restoring the park incrementally. In recent years, as much as 85 percent of the park’s budget for management and maintenance has come from private donors. Consequently, the park probably is in its best condition ever. As Benepe writes, “We tapped into a city filled with people who cared about their parks, and were willing to contribute their money and time to this cause.”

Seeing Central Park essentially celebrates this effort. The book is sure to delight and enlighten all readers—from everyday visitors to those still planning their first trip—heightening their appreciation for the park and those who made it possible. Order your copy today.