I recently donated peripheral blood stem cells (PBSC) to a middle-aged man with myelodysplastic syndrome. This is similar medically to a bone marrow donation (though less painful) and much more involved than a blood donation (which I have done regularly since I was seventeen). I found the whole process fascinating and a testament to the glory of man’s mind and modern civilization.

The patient with myelodysplastic syndrome lives in central Europe. His body’s bone marrow was no longer producing healthy functioning blood cells—that is, red blood cells, white blood cells, and platelets—a deficiency that could have resulted in his body’s loss of ability to fight infections or control bleeding, and possibly leukemia. The cure for his disease involved destroying his defective natural bone marrow and replacing it with someone else’s—mine.

Bone marrow compatibility between donor and recipient is more complicated than blood types. He needed a donor whose human leukocyte antigen (HLA) proteins most closely matched his own in order to minimize the chance of graft-versus-host disease. His doctors found my data in the Be the Match Registry, where I’m registered as a potential donor, and they judged my HLA proteins to be his best hope.

Eight weeks before the operation would take place, I was notified by phone about the match and the donation process. I was then asked whether I was willing to donate. I said yes (and was given several opportunities later to change my mind). In the following weeks, I provided two sets of blood samples to verify that I was healthy enough to donate and still a good match. I was flown out to the donation facility in Michigan to be examined physically, preview the process, and speak with the doctors and nurses who would collect the donation. My donor representative called me periodically to keep me informed and to verify my continuing consent. She also made the arrangements for collecting the samples, managed my travels, and ensured that my expenses were covered. 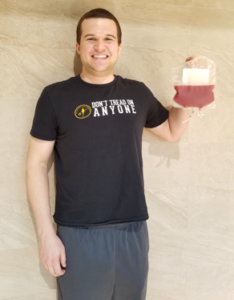 Here I am holding the final product just prior to its transportation to the recipient in central Europe.

As the donation date drew closer, I received ten shots of Filgrastim, a drug designed to stimulate additional blood stem cell formation, one shot in each arm for five days. This increased my white blood cell count far above normal and forced extra blood stem cells into my bloodstream, thus enabling the technicians to run my blood through an apheresis machine, which separated the phases of blood by density using centripetal acceleration. On the donation day, I sat in a comfy chair with an IV in each arm for four hours as a machine took blood from one arm, separated out the stem cells, and returned the rest of my blood via my other arm. While the process continued throughout the morning, the nurses took a few notes here and there, and, as my arms couldn’t bend, fed me lunch (chicken wings from Jet’s Pizza). Once the machine had collected enough stem cells for the recipient (I’m fifteen pounds heavier than he is, so it was easier on my body than it could have been), the IVs were removed, my blood was tested one final time to make sure I was OK to drive home, and I left.

My blood stem cells were then transported by private courier to the patient in central Europe. In preparation for the donation, his entire immune system and blood-producing machinery (bone marrow) had been destroyed using myeloablative chemotherapy in order to eliminate any remaining diseased cells and to suppress any immune response from his body to my replacement tissue. My blood stem cells were injected into his bloodstream by IV and then migrated to his bones to replace his destroyed bone marrow and eventually start producing new red blood cells, white blood cells, and platelets. Essentially, my blood and my immune system are regrowing in his body. With these, he inherits my allergies and infectious disease history, and, if all goes well, my life force for another few decades.

Although the organization through which I donated does not pay for stem cells (because payment is against international registry standards), I was treated well and fully reimbursed for expenses. They paid for flights, a half dozen meals, a private driver at one point, hundreds of miles of my own driving, and my stays at nice hotels.

It is worth noting that the Institute for Justice (IJ) recently sued the U.S. attorney general to legalize bone marrow and stem cell donor compensation.1 As the IJ reports, “the Ninth Circuit ruled in our favor, holding that the National Organ Transplant Act’s ban on donor compensation does not apply to the most common method for donating marrow.” This victory is especially helpful for certain minorities and people with multiracial ancestries who face significantly reduced odds of finding unrelated marrow donors. But direct compensation has been met with strong resistance by the major national and international marrow registry organizations, which also lobbied against IJ’s efforts in court.2 Currently, compensation for donations is being offered only by smaller organizations.

My motivation for donating cannot be reduced to just one reason, but it certainly was not a sacrifice. My reasons varied in depth and weight, but all were self-interested. I thought the process itself was fascinating. I was able to ask the doctors and nurses unlimited questions and to experience firsthand a medical procedure about which I had no previous knowledge. I enjoyed business-class travel, which, as a college student was a significant treat. Most broadly, I participated in an important aspect of the kind of civil society in which I want to live. I want someone to be willing to donate lifesaving tissue to me or my loved ones, should we need it in the future, and I was happy to donate first. The costs were trivial—about twenty-five hours of volunteered time and some minor discomfort. Overall, the experience was positive and spiritually rewarding.

The option to make a donation of this kind did not even exist a few decades ago. It is a function of many interrelated parts of today’s modern, relatively free-market, science-oriented cultures. The establishment and maintenance of an international donor registry requires stable, relatively rights-protecting legal systems that enable long-range and large-scale planning among cooperative strangers. To find matches in a timely manner requires the speed and integrating capacities of computers and the Internet. The medical procedure itself requires the kinds of scientific knowledge and expensive technologies made possible by today’s relatively free markets. The ability to pay for such a procedure requires substantial personal wealth, which more people have today than ever before. I am exceedingly grateful to live in our rich, science-oriented, relatively capitalist civilization at the time that I do. And I hope the recipient of my donation is able to enjoy many years more of living and loving life as I do.

Mark Coldren is a master’s student in mechanical engineering at Michigan Technological University. He has worked as an intern in the automotive industry in both product development and computer-aided engineering.
View all posts by Mark Coldren →
Bill Nye’s Golden Opportunity to Crush the Fossil Fuel Industry
Enslaved by Altruism
Return to Top