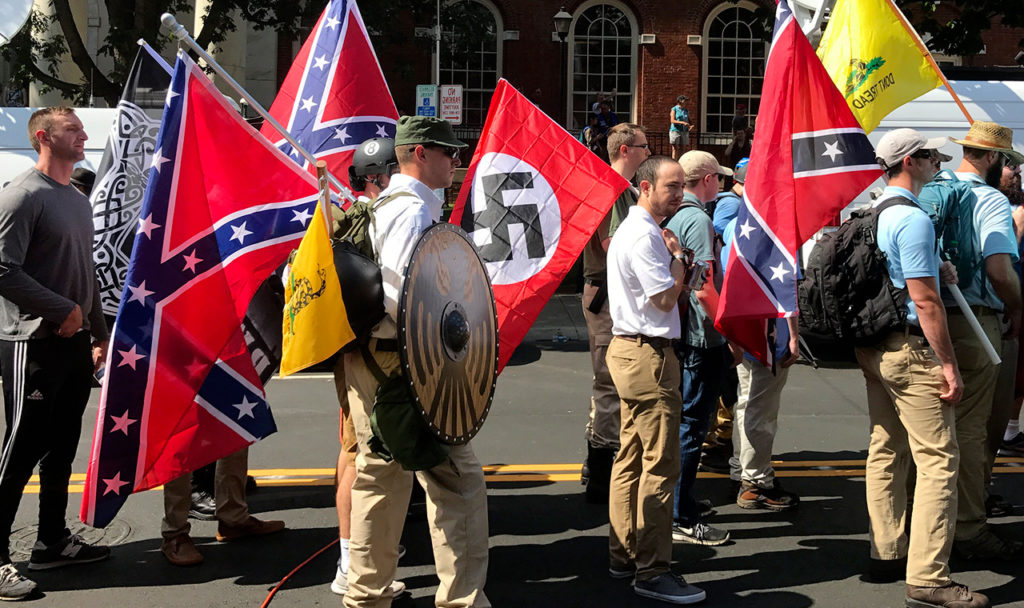 Dear friends of individualism and capitalism:

Please, for the love of liberty, do not accept the claim that the so-called “alt-right” is part of the right or that the right must atone for the evils of this allegedly “new” movement.

The “alt-right” is not part of the right; it is part of the left—specifically, the racist left. And it is not a new movement. It stands for regular, age-old white nationalism, as advocated by “Progressives,” Democrats, and National Socialists for more than a century.1

The neologism “alt-right” (short for “alternative right”) was coined by white nationalist Richard B. Spencer, who says, “race is the foundation of identity,” and America is “a white country designed for ourselves and our posterity.” Spencer advocates “an ethno-state . . . a new society based on very different ideals than, say, the Declaration of Independence.” He mocks “abstract values” such as “capitalism, and free markets, and the Constitution”; calls for white Americans to embrace racial “identity,” “nationalism,” and “a sense of ‘us’”; and says America “belongs to white people, culturally, politically, socially, everything.”2

And Spencer is not an aberration; his views are the norm in the “alt-right.”

Another leading figure in this movement is Andrew Anglin, editor of The Daily Stormer—whose slogan is “Preparing for the race war.” Anglin explains that the goal of the alt-right “is to ethnically cleanse White nations of non-Whites and establish an authoritarian government.” What about Jews? How does the “alt-right” feel about them? Many on the alt-right “believe that the Jews should be exterminated,” Anglin explains. “The end goal is ethnic cleansing by any means necessary.”3

I could go on, but the foregoing is sufficient to indicate the basic views of the “alt right.”

Do these people sound like advocates of individual rights? Lovers of liberty? Stalwarts of equality before the law? Are their ideas even in the vicinity of such values?

Far from advocating individualism, freedom, or capitalism, these creatures advocate collectivism, authoritarianism, and nationalism. Indeed, they advocate a form of National Socialism (i.e., Nazism), which is why their rallies and conferences are replete with swastikas and Nazi salutes.

To claim or to accept that these goons belong in the same political category as advocates of individual rights is to participate in a devastating package deal that obliterates crucial distinctions on which civilized society depends.

As Ayn Rand cogently emphasized, concepts are not to be integrated in disregard of necessity.4 If we want to defend individual rights, freedom, and capitalism, then we need to differentiate these concepts from their opposites. One crucial means of doing so is a rationally defined political spectrum, a spectrum on which one extreme represents ideologies and social systems that respect and protect individual rights fully and consistently, and the rest of the spectrum represents ideologies and systems that deny or violate individual rights to some extent or another.

As to the claim that we shouldn’t use the term “right” to identify our position because white racists have included that word in a neologism for their neo-Nazi movement, think about what that implies. Are we going to let noxious punks set the terms of political discourse? If so, what will we do when they start calling themselves “alt-capitalists” or “alt-Objectivists” or “alt-Americans”?

Advocates of individualism and capitalism should not even use the term “alt-right” except to explain that it is a package deal intended to blur crucial distinctions for the purpose of advancing racism.

When people claim to be on the right but advocate ideas of the left, we shouldn’t capitulate to the contradiction. We should identify it.

Richard Dawkins, KPFA, and the Illiberal, Un-American Left
A Companion to Ayn Rand, edited by Allan Gotthelf and Greg Salmieri
Return to Top